College athletes deserve to be paid

College students work hard each and everyday and receive no compensation beside tuition assistance. 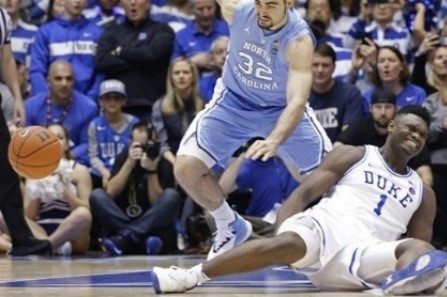 Zion Williamson splitting his shoe and spraining his knee

A huge question has been rising in the college football industry; whether or not players should be payed to play. NCAA President Mark Emmert reportedly told athletic directors that giving college athletes the right to capitalize on their name and talent poses a threat to college athletic departments.

Yet Pete Buttigieg says that not paying athletes could be a big problem when speaking with NCAA reporters. “My personal view is folks in general think that every student-athlete is going to be making hundreds of thousands of dollars,” In addition, Emmert told CBS Sports, “One or two will be making some significant amount of money. Nobody else will.”

This problem is a huge question around all the sports analysts and all NCAA decision makers. Numerous commentators from ESPN including Jonathan Hood and Nick Friedell share their thoughts in many different podcasts.

In every single college sport, regardless of whether it’s contact or not, players play at the risk of possibly injuring themselves for an extended period of time. Well, maybe not the golf team. They all put in many hours of their time in practice to be the best they can be. However, coaches are paid millions to do much less than the players.

When Duke basketball star Zion Williamson grabbed his knee and crashed to the floor during a game in the run-up to the NCAA March Madness tournament, tearing his shoe into pieces, all of his fans had two very big thoughts: 1. Is he going to be ok? 2. Is the injury hard enough to ruin his chance of going to the pro league and making a living from the sport of basketball. If you haven’t seen the injury by now, here is a video showing each painful second as well as explaining Nike’s part in it all. Even though Zion is ok now, that injury could have just as easily ruined his entire chance of going pro, and basketball isn’t even a contact sport.

Yes, many sports can be very injury prone, but no other sport is as rough as college football. Today, it is unbelievable how easy it is to find a dozen 20 minute you tube videos of “Hardest hits in college football”. Every single game, people watch these college kids get railed by one another, get carted off the field, and sent to team doctors I not hospitals. As dangerous as college football can be, it is mind bobbling how the NCAA does not compensate for the risk these players take. I’m not saying they need to be making millions, but they need at least some money to pay for basic needs such as living, bills, maybe, I don’t know, a LIFE?

We pay money to see these guys play. Even if you don’t agree, you do agree when you buy the ticket, the pay-per-view, the cable or satellite package, the jersey or the coffee mug, and so on. Unarguably, Football players should definitely be compensated for their time, effort, and risk taking.

Everyone has their opinions on this topic. Although I believe college athletes should get payed, others think that is the dumbest idea they have ever heard of. However, obviously, with all that can go wrong with the TV entertainment these athletes provide us with, they should, without a doubt, be compensated. Not only are they taking chances with their injuries, they are putting in more effort into the sport they love than most people would ever dare to try and do.