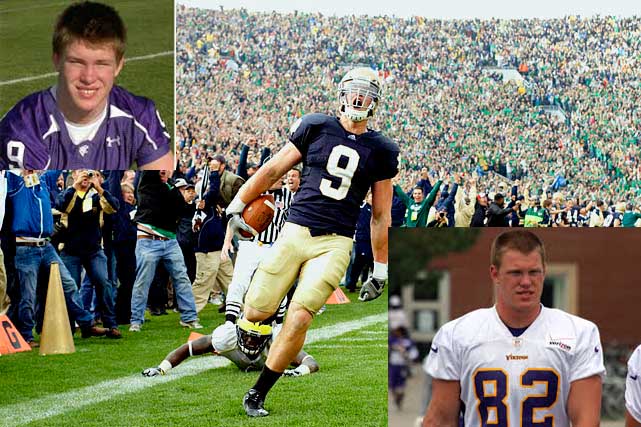 In three NFL weeks time, Kyle Rudolph will return to Cincinnati where he began his football career to play against his hometown Bengals.

For those who are ignorant enough not to know who Kyle Rudolph is, he graduated from Visitation and went on to Elder to play football and basketball. He would when go on to play three seasons as a tight end at Notre Dame before being drafted by the Minnesota Vikings in 2011.

Rudolph has had a lot of individual success when it has come to his football career.

In his senior year as a Panther he racked up 673 yards on 37 catches with 11 touchdowns. He was chosen to play in the U.S. Army All-American Bowl Game and topped out at 105 on ESPN top 150 List. For those true Elder fans, they remember his 50+ receiving yards and two touchdown performance against Charlotte (N.C.) Independence. He helped propel the Panthers to a 41-34 win in overtime at Nippert Stadium – at the time Independence had a 109 game winning streak – and ranked third in the country.

Rudolph went on to play under Charlie Weis as a member of the Notre Dame Fighting Irish. Through his three seasons at South Bend, Rudolph racked up at least 300+ yards a season with an average of 11.47 yards a catch. He left in 2010 to pursue his dream of playing in the NFL.

“There are some comparisons to college and high school in the fact that you’re still playing the game you’ve played all your life,” Rudolph said via email on the question of how the three different levels compare. “The only difference is as you continue to get to the higher levels of football there are fewer players who make it and the talent level across the teams is much closer.”

Rudolph was drafted in the second round of the 2011 NFL draft by the Minnesota Vikings. As a rookie he had 249 receiving yards with three touchdowns. Now in his third season, he has played a total of 39 games with the Vikings and gained over 1,000 yards with 15 touchdowns. His second season he was voted to the Pro Bowl and ws also the game’s MVP. This season he has suffered a foot injury putting him out for a few games but according to NFL.com, he should be back for the Bengals game on December 22nd.

Of course, Rudolph has come back home to Cincinnati many times; a Westsider can only stay away for so long. Students at Elder can look out into The Pit on certain days they can see Jake McQuaide (Rams), Eric Wood (Bills) and Rudolph tossing football and conditioning.

“I really enjoy coming back to Elder at least a couple weeks a year to workout in the weight room and facility where it all started for me,” he said. “I had a dream as a tall, skinny freshman to play in the NFL and nothing was going to stop me from making that dream a reality. With any dream you’re going to face adversity along the way, as long as you stay focused on your goal as hard as times may be you will come out on top.”

“I’d say it’s like a brotherhood between the GCL players in the league,” Rudolph said. “I always try to say what’s up to guys after games when we play each other. It’s always great to see fellow Panthers out there on the field as well. I’ve played against all three of the other Panthers currently in the league and it’s always good to see them having success at the highest level.”

Coming from the Westside of Cincinnati, this is a homecoming not just for Rudolph and his family, but for everyone. The Westside has kept tabs on him since the day he  left. I know when I switch to NFL Redzone and I see the Vikings inside the 20, I hope Ponder will toss up a fade and let Rudolph show the vertical he showed us in The Pit and on Hans Frey Court throughout his career at Elder.

“I’m extremely excited to come home and play in front of my family and friends,”  said Rudolph. “This will be the first time since ’07 that I’ve played in Cincinnati and then won’t get to come back home for another eight seasons so I’m definitely looking forward to coming home.”

Though Rudolph will be on the opposing team, every current and former Elder student will be rooting for their brother to play well along with the Bengals for a win.

Rudolph started his football career as a Visitation Viking, then went on to wear purple and white at Elder. He took a “color” hiatus at Notre Dame, and now – he is a Viking once again – and  is back wearing his beloved purple and white.