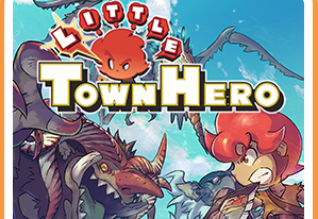 Thumbnail for the upcoming Nintendo Switch game, by Game Freak

As of next week, Nintendo is planning to release a brand-new game, and one that is so far mostly a mystery.

Little Town Hero is an upcoming game developed by Game Freak, the creator of the Pokémon video game series. As announced during a Nintendo Direct, the upcoming RPG will be released on October 16, 2019. Fans of the series can already pre-purchase and pre-load the game onto their Nintendo Switch systems for only $25, much less than the typical $60 games that have been released lately.

Though we do not have a lot of information about Town, IGN has told us that it is rated Teen, and the genre will be fantasy/RPG based. In an isolated village on the edge of the world, the only gate leading outside is heavily guarded by a castle, and the villagers are not allowed to leave. Most of the villagers are happy with this rule, but your character is the only one who seems to have a desire to leave. Unexpectedly, monsters begin appearing in the village, much to the downfall of the defenseless villagers. Using the power of a mysterious red stone to defend the village, the protagonist gradually unravels secrets of how the stones and the monsters came to be.

The game’s challenging battle system relies heavily on coming up with “Ideas” and strategies for completing every monster encounter. In some more exciting news for the game, Nintendo has announced that Toby Fox, developer of Undertale, has almost entirely composed the music for the game. His works are some of the most recognizable music for the gaming community in the past decade, and he certainly won’t let us down now.

Unfortunately for the fans of the Pokémon series, however, Game Freak has seemingly split their team in half in order to accommodate for the development of two games at once. As Pokémon players have likely heard by now, this means that the developers will be unable to give their full attention to Pokémon Sword and Pokémon Shield. The most infamous controversy that has arose came from the announcement that the new game will no longer have a “national pokedex,” meaning that players will be unable to import many of their Pokémon from old games.

Even though Game Freak’s team is split in half, Little Town Hero’s unique mechanics and original content should surely still be worth it.