What happened to the quality cartoons we used to know as kids? 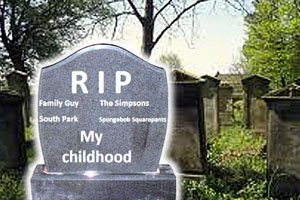 My childhood died when my favorite tv shows did

The only reason I turned on Family Guy two weeks ago was because my Facebook newsfeed was blowing up with the news that the Griffins’ family dog, Brian Griffin, had been run over by a car and killed off the show.

I turned my TV to FOX and managed to catch the final minutes of the episode, where the new family dog Vinnie was introduced and confirmed that Brian was gone for good. The episode made me realize that most of the TV cartoons I loved watching as a kid have lost most, if not all their quality and no longer have what it takes to make episodes that leave you in awe. I took a look at a few of the cartoons I grew up with as a kid and took notes on how they’ve changed since I was just a wee lad who wanted to be just like Bart Simpson when he grew up.

Obviously this is the one that everyone’s talking about and rightfully so. They killed off a character that was one of their main cast members since it debuted way back in 1999 and replaced him with some Italian dog that sounds like he got lost from Buddy LaRosa’s house. It’s a move that has everybody on social media fired up and many petitions have been made to FOX and series creator Seth MacFarlane to bring the character back on the show. But the way I see it, the show was dead long before Brian was.

All it is now is a bunch of tired, used up cutaway gags that are just as annoying as the main characters are. Peter Griffin just passes gas, tells dirty jokes and nothing he says or does is memorable anymore. Meg Griffin is always the butt of everyone’s jokes and is the one the show always turned to make fun of, but after a while the jokes got old and making fun of Meg isn’t as funny as it used to be.

The only hope the show still has is baby Stewie Griffin, who is considered to be the show’s breakout character. One of the only things the show still had going for them were the funny situations and adventures Stewie and Brian would get into, and the actions and jokes that brought them back into reality.

Now with Brian dead it’s up to Vinnie to be Stewie’s partner in crime and help bring laughs to the people sitting on their couches, something that is almost impossible for me to see. But the one thing that really gets me about Family Guy is that for months the only headline they were able to make was killing off the one character that everyone loved and could relate to, and if that’s the only way for you to get on the news, you should have stayed cancelled in 2003.

This show is like the family dog that used to be cheerful and energetic and made everybody laugh and feel good, and now that dog is diabetic and just snores and wheezes in the corner and no one knows why it’s still alive. Debuting all the way back  in 1989, The Simpsons is a show that has stood the test of time and has paved the way for all the adult humored cartoons we see on TV today. Unfortunately now it’s nothing more than recycled jokes and piles of crap that Spider Pig left on the kitchen floor. If you want to know the real Simpsons, just go ask Coach Bengal and he’ll give you their greatest seasons and episodes.

But after the late 1990’s the show started to go south. Old episodes where the plot was original and funny and had good family lessons have for the most part been replaced by recycled plots and a feeling that the show has gone on for too long. The only thing that would tempt me to turn it on would be the constant flow of famous people they have guest voicing in almost every episode. Series producer Al Jean has stated that he wants the show to get to its 30th season (it’s in 25 right now) and series creator Matt Groening probably has a lot more time to work on the show with the cancellation of his other cartoon, Futurama. The part that worries me most is that they could be going in the same direction as Family Guy because they announced that like Family Guy they too were going to kill off one of its many iconic characters, probably just as a stunt to increase ratings. I always viewed The Simpsons to be above Family Guy because it never relied on dirty jokes and current issues to make people laugh and every episode idea was original, but now it’s just another old, washed up cartoon. The Simpsons may have been a stunning, groundbreaking cartoon when it first aired, but even Evel Knieval had to retire at some point.

I know I’m going to get a lot of hate for this one since there’s so many people who still watch and love South Park, but I think that it’s definitely over the hill. The show, centered on fourth graders Eric Cartman, Kyle Broflovski, Stan Marsh and Kenny McCormick, has been a staple of Comedy Central since it aired in 1997 and was the first weekly program with a TV-MA rating. The show continues to have a large fan base and draws in new fans on a weekly basis, so it shouldn’t be expected that it will end anytime soon. No offense to any South Park fans in Elder nation, but the show is almost out of steam. Like Family Guy and The Simpsons, old episodes of South Park would feature a story line completely separate of the world around us, where the boys would go on an adventure of some sort and in the end everything was fine. Now South Park is the new definition of satire.

It seems as though creators Matt Stone and Trey Parker have completely run out of original ideas and now depend on our messed up society to keep their show on the air. So far, season 17 has had its ups and downs but it definitely has fulfilled everyone’s expectations of satire and further proof that Matt and Trey are totally dependent on current events to keep making episodes. I guess I could be giving the show a little bit of a hard time, since some episodes today are still really funny, but I watch episodes from 10 years ago and then watch an episode that aired last week and the change in quality is really noticeable to me.

An episode where Kyle would end with saying, “You know, I learned something today…” now end with Cartman shooting a kid in the chest. Despite everything that I just said, I am still a South Park fan and will watch their genius reruns and continue to tune into their mediocre new episodes every Wednesday night. The show certainly won’t end anytime soon, but if Matt and Trey want to reclaim some of the magic they had in South Park’s glory days, they better turn off the news, pick up a notebook and start brainstorming.

It makes me sad to think that kids growing up today will take one look at Spongebob and think “This is stupid”, and never know the genius it once was. Considered to be the last great Nicktoon, Spongebob Squarepants debuted back in 1999 and was an instant hit for Nickelodean. The show hit its peak in the early 2000’s and had its own theatrical film back in 2004. Little did the fans know that the movie was the beginning of the end for the show. Since the movie, nearly every fan of the old episodes complained that the show was only pandering to uneducated five year olds and that it lost its wit that had made it so popular, myself included in that group.

A good reason for this would be the fact that series creator Stephen Hillenburg resigned after the movie was released, because he had originally intended the movie to serve as the series’ finale. But the show was too prosperous and valuable for Nickelodeon to let go, so they brought in Paul Tibbitt to take over, with Hillenburg staying on board as an executive producer. As many Spongebob fans will tell you, the series died after that. Most of the episodes that aired after the movie can’t even attempt to compare to what the show was in its prime. It’s actually almost impossible to compare what used to be to what there is now, that’s how much of a difference there is. Ask any old school Spongebob fan and they’ll let you know what the difference is. Spongebob and Patrick used to be what Stewie and Brian were on Family Guy, now they’re Dumb and Dumber without the funny show. Now with a sequel to the first film schedueled to be released in 2015, only time will tell if the little yellow sponge we all grew up loving can reclaim some of the magic seen in early seasons and somehow end the series on a high note. But I guess if it comes to it, they can always just kill someone off in the sequel. Why not? They already killed off the show with the first movie.

Although all of these once beloved cartoons have hit hard times in recent years, they were all beloved for a reason. They all made us laugh and helped us realize that cartoons aren’t just for dumb little kids. They taught us that it’s not what’s on the outside of a show, but it’s the funny and witty content of the shows that make any show worth watching. That’s why I’m not going to give up on any of these shows and will continue to support them until they end, and if you are a true fan of any of these shows you should do the same.