Rogers missing in much of Neighborhood

I wanted to see more of Tom Hanks in this movie. 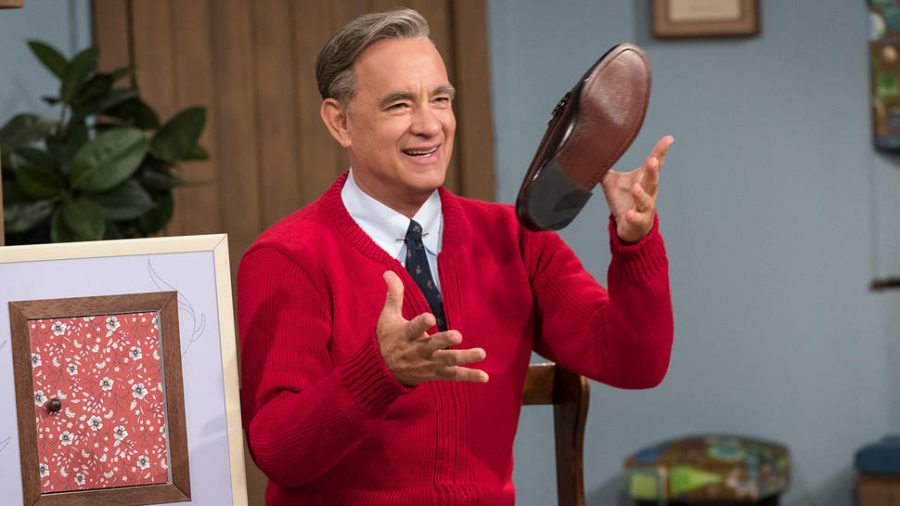 As many people remember, Mr. Fred Rogers brought fun learning experiences to young children through his television program, Mister Rogers’ Neighborhood. He was not afraid to tackle topics that some children’s programs thought were too difficult to talk about with a young audience. Mr. Rogers talked about assassinations, racism, divorce and death. He explained these situations in ways that were honest, straightforward and loving so that his viewers could understand them. Honesty was very important to Mr. Rogers and he believed that “the greatest gift you ever give is your honest self.” For that reason, he wanted to be truthful with children about all they may encounter.

In a story about kindness and honesty, two-time Oscar-winner Tom Hanks convincingly portrays Mr. Rogers in the film, A Beautiful Day in the Neighborhood. Just as Mr. Rogers helped children deal with universal issues on the air, this movie which is based on a true story about how Rogers helped a cynical adult with his real-life issues.

The man Rogers helps is a journalist named Lloyd Vogel. Vogel is sent to interview Mr. Rogers for an article about heroes. When defining a hero, Rogers said, “Anyone who does anything to help a child in his life is a hero.” Clearly, Mr. Rogers believed that real heroes are not those who usually get mentioned in a magazine, but those who positively affect the lives of children. In addition, he did not allow being a celebrity to change who he was. When asked about his fame in the movie, Mr. Rogers stated that “Fame is a four-letter word like tape or zoom.” A Beautiful Day in the Neighborhood is filled with these kinds of heartwarming examples of how Mr. Rogers really was what people saw on TV; he was a humble man who truly cared about people. He especially wanted to tell children that they are worthy of love and wrote songs that let them know that they are special.

SPOILER ALERT!!
The movie opens with the classic Mr. Rogers neighborhood set, then shifts to Lloyd Vogel at his sister’s wedding in a physical fight with his father. I feel like this was a good place to start the movie. Beginning that way and then watching Mr. Rogers change his sweater and shoes as he sings, set the tone for the audience. That transforms them to their younger selves and reminds them of the goodness that Mr. Rogers embodied. Then, the fight immediately jolts us back and reveals why Vogel is such an angry man: his relationship with his father. Lloyd receives scratches and a black eye from the fist fight with his father. Of course, Mr. Rogers sympathetically asked Lloyd about these marks. That is the first moment in the movie where Lloyd seems to show any emotion. Through a series of conversations, we observe how Mr. Rogers makes a connection with Vogel and makes him feel special. This was done very well because it gave the audience early hope that Lloyd would be able to learn forgiveness.

However, that change did not happen quickly. The movie shifted to a visit by Lloyd’s father and his girlfriend at Lloyd’s house to reconcile, but Lloyd would not forgive him. It was a clever time to tell us that the real reason for Lloyd’s anger was the way his father had left his mother in her time of need. After Lloyd told his father how his mother suffered during her last days, his father suffered a heart attack. Once the camera focuses on Lloyd’s uncaring face, the audience sees just how much hurt Lloyd still felt. Although this disclosure allows the audience to understand Lloyd better, I wished that the Mr. Rogers character appeared more during the movie.

The plot that does not focus on Mr. Rogers is very predictable: two people hate each other, a tragedy occurs, they love each other and then one of them dies. The relationship between Lloyd and his father was not unique compared to other relationships in movies, but it was nice. It was very much like the father-son relationship in I Can Only Imagine. The heartfelt moments between Lloyd and his father were touching near the end of the story. Not surprisingly, with his gentle kindness, Mr. Rogers facilitated their gradual journey to a healthier father-son relationship which seemed genuine.

I appreciate that the movie incorporated some other traditional elements of Mister Rogers’ Neighborhood such as the puppets. For instance, in the Land of Make-Believe, we see Lady Aberlin talking with Daniel Tiger. There is even a behind-the-scenes look at Mr. Rogers playing the role of Daniel. Even though I liked the point of these scenes, I did not always like the way they were presented. For example, there was a sequence where Lloyd thought he saw Daniel Tiger in a bag carried by Mr. Rogers. Then Lloyd goes on a chase and suddenly becomes a puppet himself. This added nothing to the movie. While I do understand that, since each puppet symbolizes different aspects of Mr. Rogers’ emotions, making Lloyd a puppet showed that he is becoming emotionally vulnerable. However, that was an unnecessary sequence that was difficult to follow. What made it even worse was that it was just another cinematic “he was passed out the whole time” moment. That is why I would not classify this movie as a classic because not every part of it enhanced the story.

Tom Hanks thought that “it was terrifying” to play such an iconic man like Mr. Rogers. He said, “Everybody has an idea of what Fred is, what Fred was like.” Hanks had a wonderful interpretation of Mr. Rogers and brilliantly portrayed him. Hanks slowed down his words and listened intently to everything each character said. He reminded us to appreciate life and the people in it. Hanks was exactly what people think of when they think of Mr. Rogers. Through his portrayal, the audience was reminded that Mr. Rogers was a loving, caring man who wanted people to know that they are special and liked for who they are.

My final critique of the movie is that there was not enough of Mr. Rogers. Tom Hanks was clearly the star of the movie, but he was not in it as much as the trailers suggest. It seemed to be a story about Lloyd and Mr. Rogers was just in it. It is probably not what most moviegoers will expect. However, one thing Mr. Rogers taught us is that we don’t have to be perfect to be liked. So, if you grew up always wanting to have a neighbor just like Mr. Rogers, you will enjoy A Beautiful Day in the Neighborhood.