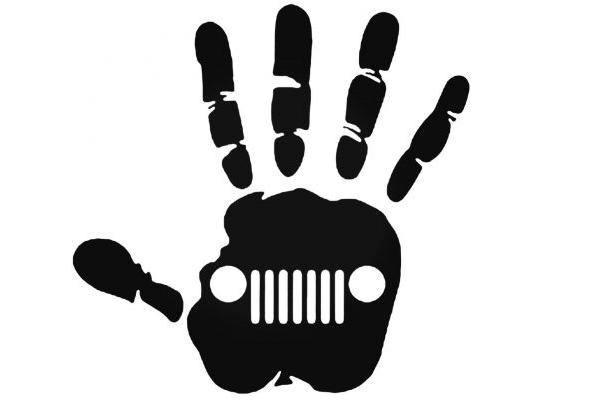 There is almost nothing nowadays that everyone agrees on. Every single day we hear about new disagreements that lead to violence and destruction. Many of these disagreements are more focused on politics, but there are also some that deal with more everyday things, such as what religion is correct and what gender a person can identify as. Despite the constant varying opinions and actions in our world, there is one thing that everyone manages to agree on: The Jeep Wave.

The Jeep Wave is one of the greatest things ever created. It is a simple wave that all Jeep owners do when passing another owner on the road. There are many rumors as to where and when this originated, but the majority say it had some connection

with World War II. One theory says that soldiers drove Jeeps up and down the battlefield to deliver supplies and help the wounded during the war. While doing this, drivers would wave to other Jeeps to figure out if they were friendlies or enemies. Another theory says that because many soldiers drove Jeeps during the war, many wanted to own one after the war. This led to Jeep owners waving when passing another Jeep because it was likely being driven by someone else who served.

I had the privilege to catch up with Jeep motorist Joe Weber and ask him what he thinks about the Jeep wave: “I enjoy the wave because I, Jeep driver, realize that the other person waving is just as cool as myself.” Weber believes that having a Jeep and participating in this wave actually makes you cooler. I cannot disagree with this take. When asked how frequently he is waved at Weber responded, “All the time, but it happens much more in the summer.” I believe this is because most Jeep owners have their tops down in the warmer weather. Nonetheless, it is great to see this tradition still standing many years after it was created.

I also had the opportunity to catch up with car enthusiast Jake Westerkamp and hear his thoughts on the wave. Westerkamp said he is a huge fan of the Jeep wave but still has some concerns about it: “I feel that if you drive a REAL Jeep then you can participate in this tradition. But, if you drive a Kroger Brand Jeep then do not even try to do this.” Some bold words from a bold person. I couldn’t agree more with Westerkamp. I believe that only Wrangler drivers should partake in this wave.

However this wave originated, it is a miracle that it is still around. I would even go as far as to call it something magical. My dad owns a Jeep, and I had the privilege to drive in it several times. Previous to my first Jeep ride, I had heard of this wave but considered it an urban legend. However, not long into my drive, I was blessed with a wave from another Jeep owner. Absolute chills. It is not an exaggeration when I say this may have been the greatest moment of my life. Because of this amazing feeling I felt, I hope this tradition continues to pass down from generation to generation. It is up to Jeep drivers everywhere to keep it alive. So, I ask all Wrangler drivers, “Will you do your part?”