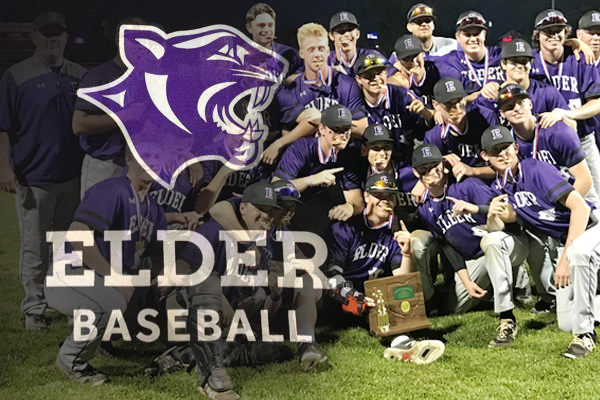 Last year's varsity defeated Centerville after a rain delay to win the Sectional.

As spring begins to set in, everyone is looking forward to the sport that runs this time of year; baseball! Not just any baseball, but the Elder Panthers’ baseball season. Finishing their season, losing in the Regional Semifinals to the Springboro Panthers, Elder finished their 2019 season with a record of 22-10. This upcoming season, the Panthers are back and are looking for a revenge tour. I talked with seniors Colton Sandhas (starting pitcher), Kory Klingenbeck (catcher), and Zack Williams (first base) to discuss the upcoming season, and what to expect from this new team.

The first person I sat down with was Colton Sandhas. Colton has been a pitcher on the varsity roster for three years now, and is a well-known lefty in the GCL. I first asked Colton what he expected from this upcoming season. He responded with, “Our goal this year is to win GCL, and make a run in the state tournament.”

Colton is one of the hardest working, and mentally tough kids I know, so I am certain that he will lead the Panthers in the right direction this year as a starter. I then asked Colton if he had any individual goals for himself, which he answered with, “I am really wanting to win “GCL Pitcher of the Year” again, so that would probably be my biggest individual goal.” Colton is one hell of a ball player, and I cannot wait to see what he’s going to do on the mound this year.

The second person I interviewed was first baseman Zack Williams. Zack recently committed to play baseball at the University of Indianapolis after high school. Zack has been on the varsity squad for two years now, and has moved around from thrid to first Base. Zack lead the team with the highest batting average last year (.418), and was a force to be reckoned with by pitchers. I asked Zack about his own individual goal this season, and he said, “Individually I’d like to increase my game; maybe hit a few dingers out of the park and have a stronger mentality this year.”

I than asked Zack if there were any underclassman whom might be standouts this upcoming season. He responded with, “Oh yes, there are a decent amount of underclassman who have a lot of potential this year. One in particular would be Brian Weber. Brian plays third base, is a beefy, girthy unit, and has a hose from third.” Meaning he has a good arm, for you uncultured sports fans out there.

Last, but certainly not least by a long shot, I interviewed the one and only Kory Klingenbeck. Kory has been on the varsity squad all four years at Elder, playing as the quarterback of the field, behind the plate at catcher. Kory is also committed to play baseball at Walters State Community College next year. Kory is well known for his quick “pop time”, and makes baserunners think twice before attempting to steal a base. I asked Kory as well what was one of his personal goals for the season, and he said, “Win all my accomplishments again like I did last year: First Team GCL, First Team All City/District, and get First Team All State instead of Second. Oh and of course, GCL outright champs.”

With these three out in the field, I truly think the Elder Panthers are going to be something special this year. The Panthers kick off their season against Centerville on Saturday, March 28th @ Centerville (12:00 PM). Wishing the best of luck this season to them, and a long run in the State playoffs.