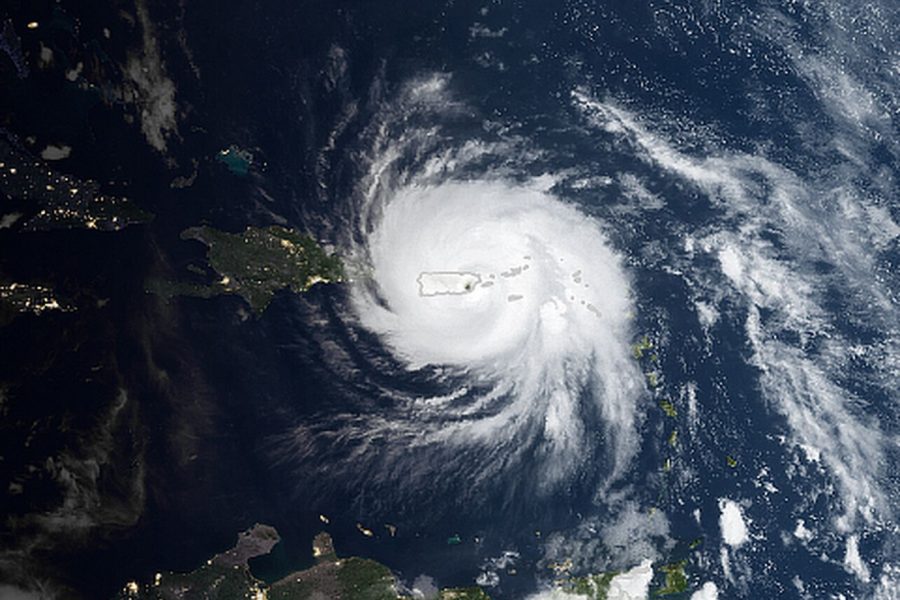 With global temperatures rising at unprecedented rates, we can expect more scenes like this one of hurricane Maria seen from the sky in 2017.

To put it simply, 2020 has already been dealt us too many blows to fully comprehend. The year started off with everyone thinking that we were going into WWIII, and then it shifted to the tragic death of the loved basketball star Kobe Bryant. More recently, however, the world has had to deal with a global pandemic called the Coronavirus that is currently still infecting thousands of people every day. For most, that’s enough bad news to last them for the entire year, but for 2020 the bad news simply has to just keep rolling in.

As most people should know already, the Earth has been steadily warming at a rate that is completely unprecedented. In 2020 itself, in Cincinnati we had both the warmest March and February ever recorded. Most people debate as to the effect that humans have on this warming, and whether or not it is truly being impacted so much by humans releasing toxic emissions into the air. One thing that can almost never be argued within this topic though, is the topic of the weather patterns. The weather patterns have become much less predictable than years before. This is especially true when the hurricane predictions are brought to the forefront.

The hurricane predictions for the year of 2020 are extremely high compared to years prior. There are supposed to be at least 16 Atlantic storms this year when the season approaches, including 8 that are characterized as hurricanes. In 2019, there were 18 total storms within the season, and three of them were between category 3 and 5 hurricanes. Also in 2019, there were six reported hurricanes and the entire season tied for the fourth most active season since they began recording.

You may ask, what are the chances for the 2020 season and how does this have any effect as to what is currently going on. Well, the 2020 season is expected to have roughly eight hurricanes, with four or five of them getting up to at least category three. When talking about landfall, according to CNN, “The chance that at least one major hurricane will make landfall in 2020 along the US coastline is 69%, compared with an average over the last century of 52%, researchers said.” This means that the chances for seeing one, if not multiple hurricanes make landfall in both the United States and the Caribbean is extremely likely. The last season to have this high of an average was in 2017, which caused extreme damage with the storms of Harvey, Irma, and Maria.

Now, I am not saying that the United States and other countries have not had to deal with other natural disasters before, but this time around the playing field is just a tad different. With the global pandemic that is the Coronavirus not peaking yet, this can cause severe problems for states and countries that have not yet been too badly exposed to it. Take New Orleans for example, they have been hit bad with the Coronavirus, but what exactly are they supposed to do with all of the patients if one of those hurricanes makes landfall on Louisiana during this time. They cannot safely evacuate everyone, but at the same time they will not have the ability to protect everyone who stays in the hurricane area.

For countries that do not have the medical equipment the United States has, they are already at a severe disadvantage. They will not have the ability to transport their patients at all or even protect them from the hurricanes that are coming.

Every horror sci-fi movie starts when someone ignores the scientists. We can’t ignore these predictions and people most start to think about their plans way before they are going to be put into these situations.