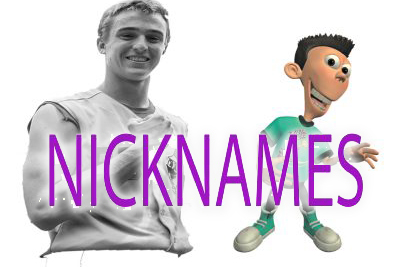 The noted and notorious nicknames of the class of 2020.

Everyone at some point in their life has been given a nickname. In fact, the high school experience usually comes with a lot of nicknames depending on the kind of person you are. This years senior class has quite a few notorious nicknames. With that being said, let’s jump right in and see how some of these nicknames came about.

For as long as I’ve known Sammy, I’ve only heard people call him “Sal”. It’s pretty obvious where the nickname originated from and there’s no real in-depth story behind it, but its definitely one of the most notorious nicknames. Who knows, he might not even respond to Sam anymore at this point.

Mason has alot of nicknames, and a good deal of them I have personally given to him myself. However, I picked the most mild and tame one I could find for my collection. In all honesty, I had to think about how I came up with this one, and I have no idea. All I know is that eventually “Cheddar” turned into “Cheddar Chunk”, “Cheddar Burger”, and so on. When I asked Mason if he had any idea why this originated, he responded, “no idea.” So, I guess we will just leave it at that.

If you call Jack “Jack”, absolutely no one will know who you are talking about. Right now, I am even finding it hard to type the name Jack because I’ve never called him that before. He told me the nickname “Dutch” originated from one of his coaches in grade school when he called him “the flying Dutchman” and it transitioned into “Dutch” every since then.

This nickname was first spoke out of the mouth of Jake Byrne. Why exactly is what remains a bit unknown except the fact that it includes the first part of his first name. However, this nickname has really taken off this year and you’ll find just about everyone addressing him as “Nich”.

Will has gone by “Tutz” pretty much all four years here at Elder. Short for Tuttle, just add a “z” or sometimes spelled with an “s” and you have a nickname that describes a big, hefty, yet fine looking man. Tutz always has a smile on his face and is most famously known for standing on the lunch table while taking his shirt off on Friday’s, and doing the “HEY YO” cheer.

This nickname really speaks for itself. Ethan is simply a bucket of water in basically everything he does. His shot is said to be as smooth as Curry’s and his range is unlimited.

Every since freshmen year, that’s all I’ve heard people call Alex. Considering his height and lengthy stature, it makes sense why people call him “Big Al”. I’d give him a solid 6’4″, with a wing span that is comparable to Giannis Antetokounmpo.

For anyone that knows Zack, he looks like that cartoon character from Jimmy Neutron named “Sheen”. Simply put, Zack is “Sheen” and there’s no denying it, therefore, everyone calls him “Sheen”.

No one actually calls Evan this except for me, but I think its only fair that I add it in here. This nickname originated junior year when Evan had to get a root canal because he was called upon to bunt sophomore year in baseball and got hit in the tooth. Ever since then, I have only called Evan “Root Canal”.

Not much to this nickname other than the fact that Gabe is the batboy for the Cincinnati Reds and sports a “BB” on the back of his jersey. It’s a simple and quick nickname to say and has stuck for a couple of years now.

Originally, Tommy started out as “Tri-sport” because he wrestled and played football and baseball. However, he did not wrestle this year and therefore was re-nicknamed “Bi-sport”. The nickname “Tommy football” comes from the notorious Johnny football or Johnny Manziel. The moral of the story is, Tommy can do it all.

Per my sources, I’ve been told that the nickname “Champ” originated freshmen year during football season. Rumor has it that Coach Cook did not know his first name so he called him “Champ” after hall of fame corner, Champ Bailey.

I saved this one for last because it’s probably my favorite out of all them. No rhyme or reason why this name is what it is… it just is. One day I called him it and ever since then, I’ve maybe said it three times. It’s more of a rare nickname that lies resting until it can be utilized in an appropriate fashion.

I know I probably left a few out, but I hope this gave you a glimpse of some of the harmless name calling we like to entertain ourselves with everyday WHEN WE ARE IN SCHOOL.