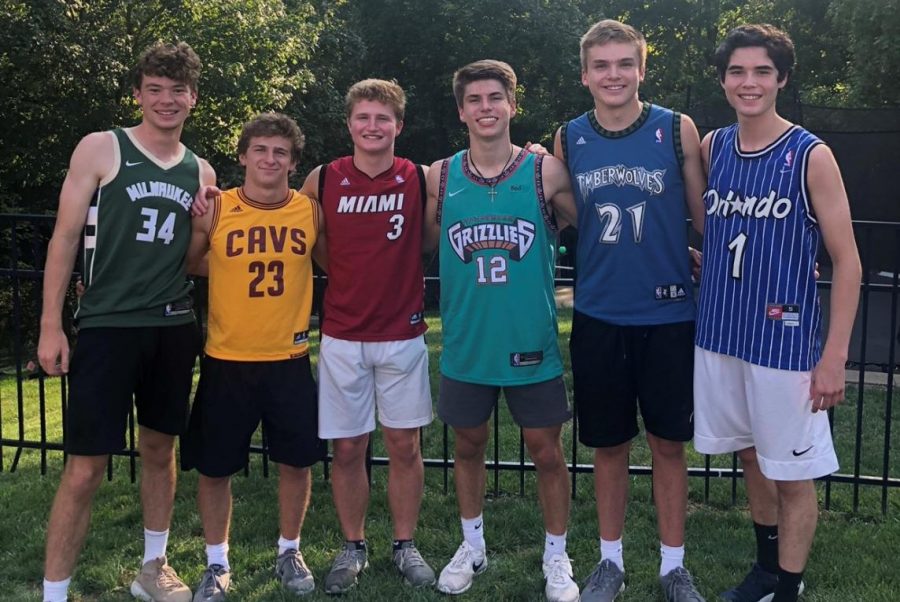 provided by the author

Elder seniors preparing to cheer on their brothers at an Elder football game this past fall. Who knew what would be happening in the spring?

Upon beginning my senior year, I could never have imagined a tragic pandemic would be the cause of a potential end to my senior year, and most importantly, a threat capable of killing millions.

Now, that’s obviously a very pessimistic approach to an uncertain future; however, it is a real and very plausible possibility. For many this can be difficult to comprehend, and for those not yet affected, even more so. The news and media all preach contradicting and confusing statements every day to make matters even more confusing for the majority. Yet, despite contradicting statements and statistics, one crucial point has been revisited and restated by almost every last one of the media outlets reporting updates. The idea that people must support one another during this time is prevalent in almost every single speech, article, and briefing on this awful disease.

This inspired me to interview other high school seniors from high schools in the Cincinnati area on just how the virus is affecting them and their outlooks on their class’s senior year. Because at the end of the day when you put the rivalries aside, all students and teachers from any school are being affected in similar ways. At this point in the year, no matter the school, seniors are all a part of the class of 2020 after all.

I first asked Seton High School dancer Abby some questions on the current cancellation of school. Abby is incredibly active in her high school, and even helped win a national title in dance this year with the help of her teammates. Considering her often hopeful and positive attitude, I figured asking her what some positives her and her class have taken from the current cancellation of school have been. She replied “I think overall we have handled it pretty well. Like everyone else, we got upset. But, we couldn’t control the circumstances. So, we took what we had, and now we have to come to terms that this happened to our senior year because we can handle it.

At the end of the day, we have been blessed with an amazing year. Our class have taken this time to honestly count our blessings and spend time with people we love in our homes. This time has allowed us to return down to earth and respect all the things we love.” Abby has spent this time like most, simply being with her family and respecting the concept of social distancing. She’s even tried out painting. It is safe to say she has committed herself to safely making the best out of the situation.

Josh may not play sports at Oak Hills, and he may leave school early every day because he has received enough credits to graduate already, but at the end of the day Oak Hills High School has been Josh’s home for the past four years. Like most students Josh found the inability to see his friends at school to be the largest disappointment this tragedy has brought.

I asked Josh too if he has found any positives through this situation to which he replied: “It’s definitely taught me to appreciate every moment even if it’s something as small as driving around because you never know when it can be taken from you”. If there is a senior who could say this, Josh is that student. He is restless, and is always looking for that next adventure. Sometimes when moving as fast as he does, it can be hard to appreciate what you have been speeding by. Seniors can now say if they haven’t already that they wish they had more time. That is universal.

If you think sports at Mercy McAuley, it’s likely a name that would come to mind is Rachel. A three-sport athlete – running cross country, playing basketball, and lacrosse – Rachel has adapted to her high school life even amidst the controversial transition from Mother of Mercy High School to the new Mercy McAuley.

While the choice to transition may not have been completely hers, she has remained an active member of her class and agreed to reflect on some of the opportunities she will miss most because of the quarantine.

She named prom and graduation as two of the largest letdowns, but a unique one was the missing of her final season playing lacrosse for her high school. Lacrosse is Rachel’s favorite sport to play, and although she may be blessed to say she will be attending Seton Hill University to play lacrosse next year, a final season with her high school is a special moment that has now been taken away.

Despite this, she has remained bright regarding the situation and said: “I’ve used this situation to appreciate my family more, and allow time to focus on bettering myself considering I never normally have the time to do so”. Like other athletes deprived of their final seasons, she has remained strong and is an example of how to fight being dealt unfair hands.

Delaney Smith or “Del” is yet another heavily active student in her school, and has been for the past four years. She was on the varsity volleyball team, and will be attending Lipscomb University next year to continue playing. While she may have gotten to enjoy her sports season, Saint Ursula Academy seniors will not be returning to their high school this year no matter what.

Upon hearing this news, I decided I would ask Delaney what her outlook on their specific situation entailed. She told me that the most disappointing part of her school’s cancellation was that she “would no longer be able to go to school with [her] cousin anymore”. This was a special part of the morning for Del and lots of other people involved in carpools to school that were shut down.

Another shining example of a simple moment people have taken for granted. This time has allowed many people to become more self-aware of their environments. During my interview with Del this was obvious, and she made a closing statement that I felt should be heard. “I think everyone has realized that we need to make sure we cherish all the time we have whether it’s at school, with family, or with friends. I feel like everyone has learned the lesson that you never know what is going to happen, so live it up while you can”.

Jacob is a senior at St. X, and was a member of their football team the past four years. I have known him since grade school, and his pride for his school is awesome to see. I talked with Jacob about a lot of the same things that I discussed with other students, and a lot of what was said was what the nation’s seniors have been echoing the past month; however, the conversation also floated into the idea of the community.

We talked about the importance and relevance of the tough decision to close the high schools, and that ultimately the decision was in the best interest of the community’s health. Specifically, Jacob said he was “proud to know that he is playing a role in all of this, and to help prevent the spread of the virus so there may be an ending to this ordeal”.

I felt that this statement was one of heavy importance because that is the real reason for this cancellation, and people must remember that. The ability to appreciate being a role in something larger was apparent in the way Jacob talked. He was not alone either. Every single senior I talked too surprised me in their appreciation of the bigger picture. That’s something special.

I figured it only made sense to ask William (second from the left in first image) about the quarantine. For those of you who do not know, William was set to wrestle in the state finals right before the epidemic truly gained gravity among the American people.

William, or “Willy”, is one of Elder’s finest. He has a character built to connect with others and he acts as a leader for the school. Amidst his greatest disappointment of his high school experience, William finds the strength to still be someone people can come to and look up to. He has been an example of what it means to remain optimistic, and is still hopeful Elder as a whole will “be able to spend the last two weeks of high school with the friends that we met coming in four years ago”.

He has also sung praises of the Elder teaching staff: “All of my teachers have made this process smooth and efficient, and it is obvious that they care about each and every student’s success.” In particular, he shouted out “Mr. Schlomer’s 8am Zoom meetings” which display the entire AP Stats class in all their morning glory. Willy like all other students in this article have kept positive attitudes regarding the epidemic: something to be admired if I do say so myself.

My peers act as reminders that it is crucial we stick together during this epidemic. We are all one in the same, and every person, are struggling along with the person next to them. Health care workers risk their lives everyday for those around them, teachers make it their goal to provide an efficient learning experience for countless students, and everyday workers continue to provide for their community and families.

I wrote this article to help illustrate the idea that rivalries and bad blood cannot prevent people from working together. Every student who participated in the interview helped to sing the same tune. People from different environments affected in shockingly similar ways. Continue to think of others during this time. Remember to place a heavy emphasis on meeting the needs of others in your lives because even the smallest actions can lead to the largest results.