Greyhound will be delayed but worth the wait 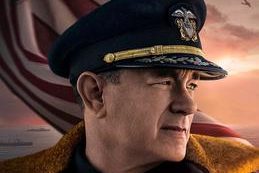 The upcoming American war film, Greyhound, is going to be one you do not want to miss. The film is directed by Aaron Schneider, and has a screenplay written by the great Tom Hanks, who also stars in the movie as Commander Ernest Krause. Greyhound is based on the novel The Good Shepherd by C.S. Forrester, that was released in 1955. The film was originally scheduled to release by Sony Pictures Releasing on June 12th of this year, but was postponed indefinitely due to COVID-19.

Greyhound follows US Navy Commander Ernest Krause on his first assignment as a commander of a escort group in charge of protecting merchant ships, from German U-Boat attacks, on their journey from America to Europe in World War II. Better known as convoy systems, this way of getting supplies across the ocean was practiced during the Battle of the Atlantic. Commander Krause’s first assignment becomes a treacherous one. As he embarks across the Atlantic, in charge of 37 Allied ships, he soon realizes that he is being hunted by a wolfpack of German U-Boats. The film mainly focuses on Krause, who is finally given the opportunity to lead a convoy system, and his ability to do what needs to be done in order to save as many supplies and men as possible.

Some other actors who make an appearance in the film Greyhound are Elisabeth Shue, who plays as Commander Krause’s wife Eva. Tom Brittney appears as Lt. Watson, and Devin Druid plays as Wallace. All play vital roles in the upcoming film.

I personally believe that this movie has a lot of potential. As a huge fan of war movies, I think that this movie is going to be a great one. Tom Hanks never lets viewers down when it comes to staring in movies, and as the writer of the screenplay, I guarantee that you are going to want to see this movie, whenever it comes out. I have attached the trailer below, and recommend you go give a look yourself at what this movie holds in store.