Why graduation at the Pit is great enough to stay 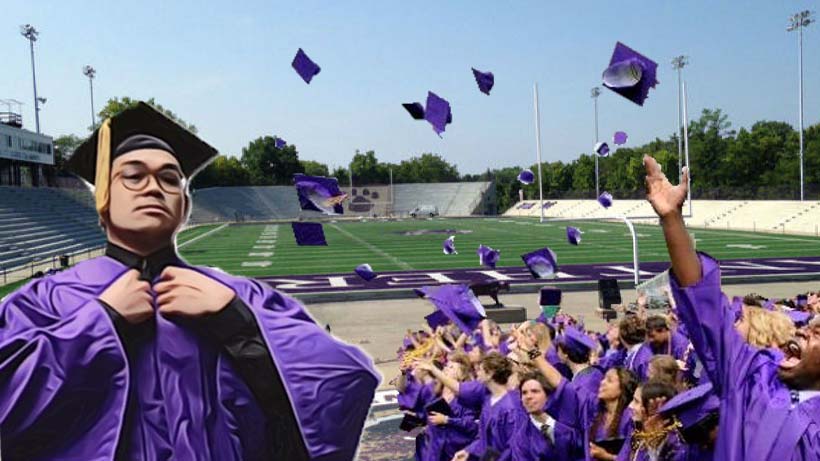 Here's why graduation at the Pit should be here to stay

Obviously, this whole pandemic has taken its toll on everyone, the Elder community being no exception. Seniors, especially, have gone through a lot in the past two months. At such a critical time in our lives, having our last days at Elder has been extremely difficult. And with other events such as prom and Elder-fest cancelled, seniors can’t help but to feel robbed of many of the things we were looking forward to for the last couple of years. Some things will still happen, however.

A few days ago, Mr. Ruffing announced that graduation for the current seniors would be held in the Pit on July 30th. Usually, seniors and their families celebrate at Xavier University’s Cintas Center. Upon hearing of the change for our graduation’s location, many other seniors and I were ecstatic. Even though our graduation may be limited in terms of participants, I can’t help but notice all of the positives coming from graduation being changed.

First, there are a few negatives about graduation at the Pit this year. Obviously, attendance will probably be limited in some way in terms of people allowed, but that is understandable due to the circumstances. Also, the Pit probably isn’t as comfortable physically as the Cintas center, especially for older people. But, the football games haul in a pretty diverse age group, and most people seem to get along fine during those. And seeing that restrictions may limit the amount of guests allowed, hot weather and rough seating shouldn’t be a problem for students or the rest of the guests attending. Also, hopefully the weather is permitting enough for us to have graduation as planned on a Thursday night. Otherwise, I see no downsides.

Now, for the positives, and the explanation as to why graduation at the Pit is a genius idea, and should be kept as a tradition in years to follow. First, its free. Hosting graduation at Elder costs Elder absolutely nothing other than maybe some tables and a few chairs, and however much it costs to print a diploma. The funds that usually go towards renting the Cintas center could be used for anything else that needs it. There are many programs at Elder that could use funding, or maybe the graduating seniors could all get a really big cookie to celebrate their success.

Second, having graduation outside, late into summer, is going to be beautiful. Elder has a beautiful campus; some of the best pictures on my camera roll have been taken around or of the school building in the sun. Also, although this year may be a little warm, having future ceremonies earlier in summer will make the weather even more enjoyable, and enhance the experience as a whole.

Finally, the good stuff. Graduation at the Pit would by far be the most meaningful place to host it. Growing up, Friday nights at the Pit were what made every kid who was there want to come to Elder. Going to the first game freshman year was the realization for many people of a lifelong dream coming true. Every game in the cheering section was special, and not to brag, but the class of 2020 saw some of the best football games Elder has ever played in, including a state finals season. Even for those who never played at the Pit, it is a symbol for our school, synonymous with everything Elder stands for. Having graduation from a just a gaze’s distance outside the windows in which we spent many an hour studying and testing and learning helps us celebrate our achievements at students, atheletes, and young men who are now better than they were four years ago. Graduation used to be held at the Pit years ago, students would march right through Price Hill from St. Lawrence back to Elder for the graduation ceremony. There’s no reason why it couldn’t be done today.

Principal Ruffing talked about his reasoning behind changing the graduation date on a live broadcast on ENN last week. Mr. Ruffing provided lots of great information, including the following points: “As of now, baccalaureate mass will not happen in conjunction with the graduation ceremony, but may be rescheduled”, “assuming we have a ceremony, we will definitely stream it online, so all kinds of people can watch it”,  and “my plan is that if we have graduation July 30th, we would be able to have unlimited guests, but we don’t know what it will be like July 30th”. This broadcast was very informative on all things Elder and Coronavirus related, and I would recommend watching it if you have questions that need answering. It is available on the Elder News Network page.

In my opinion, graduation at the Pit is a great way to deal with its usual ceremony at the Cintas Center being canceled this year, and I think that if it works well this year, it should be continued next year, and many years after. I would be willing to bet that at least 95% of students would support graduation at the Pit, and at least 70% of parents. Why not let the people decide; with today’s resources, polls could easily be taken once a year to determine graduation’s venue. After all, Elder provides a community composed of traditions defined by excellence, why not start another?