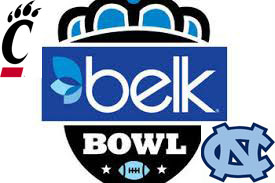 The Tarheels started off the game with a bang and they never looked back. They lead the game 16 to zip at the end of the first quarter after a rushing touchdown, a safety after tacking Cincinnati quarterback Brendan Kay in his own end zone, and a 78 yard kick off return on the following play. But even after falling behind this quickly many fans didn’t think the Bearcats were finished, because in the 2012 Belk Bowl they were down 21 to nothing and rallied back to beat the Duke Blue Devils.

Once again, this year’s Belk Bowl didn’t go as well as the last for the Bearcats. Elder alum, Cincinnati kicker, Tony Miliano hit a field goal, but this would be the only points the ‘Cats put up before half. They went into halftime down 23 to 3. The game didn’t get much better. The final score was in favor of the Tarheels 39 to 17.
Although the bowl game loss wasn’t the ideal ending to the season, going 9-4 in new head coach Tommy Tuberville’s first season was still impressive. Changing any programs coaching staff from top to bottom often leads to chaos and losing in the first season, this year’s Bearcats accomplished a lot in Tuberville’s first season even after multiple setbacks.

Losing starting quarterback Munchie LeGaux just a few games into the season was a crucial setback for this year’s team. Senior Brendan Kay had to come in and take over the quarterback role after the injury. Kay did a phenomenal job, at one point he was top five in the nation for completion percentage. The team also had to deal with the death of a teammate, Ben Flick, a redshirting offensive lineman, after being involved in a car crash after the Miami game. Two other teammates were also involved in the crash, leaving one of them in intensive care for over a month. The Bearcats had many other injuries especially on the offensive line, losing four players for extended time, one of them being Elder alum Austen Bujnoch who missed multiple games including the bowl.

The Bearcats have a bright future with the continuity of the coaching staff heading into next season and many returning players. Notre Dame transfer Gunnar Kiel is projected to be the starting quarterback next season and the Bearcats return an unbelievably talented receiving corps. The defense will return at least eight starters from this year’s squad and look to improve their performance in the New Year.

All in all the Cincinnati Bearcats footballers had a respectable season. The Belk Bowl didn’t go as the fans, coaches, or players would’ve liked, but anytime you win nine games it’s a good year. Hopefully, Tommy Tuberville and the Bearcats work hard this offseason and come out hot in 2014.