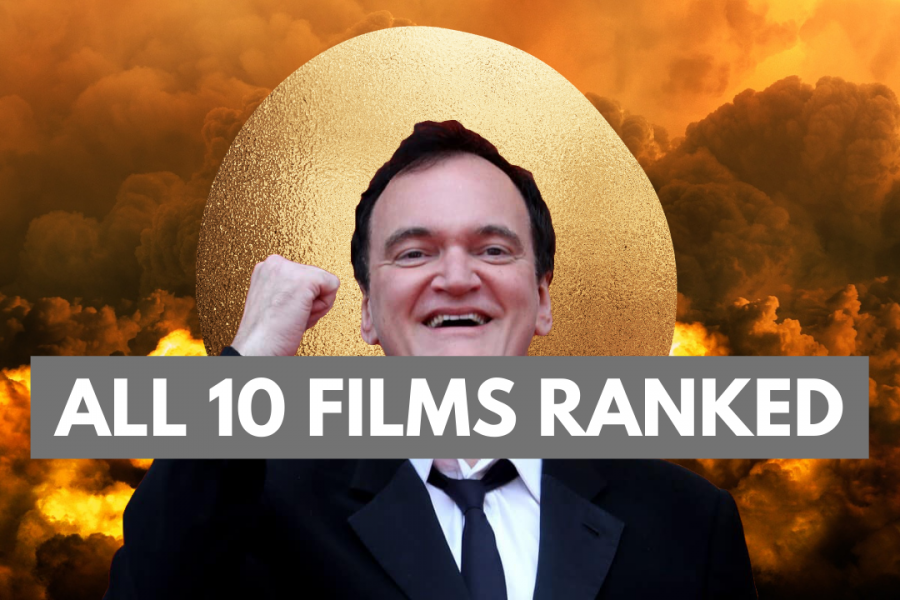 Quentin Tarantino’s name is almost synonymous with Hollywood. It’d be hard to talk about the best directors currently, and of all time, without mentioning him. He is often praised as a creative genius, and his style of directing is unique. No matter how hard Hollywood tries, they just cannot replicate the Tarantino feel.  Tarantino has left, and continues to leave an indelible mark on pop culture.

He has been in the directing game for a long time, and with his almost 30 years of directing experience. He has produced some of the most critically acclaimed and widely known films to date. As a fervent fan of Tarantino, and film in general, I decided to make a definitive ranking of all ten Tarantino movies.
10. Death Proof
Widely considered to be the least alluring of Tarantino’s ten films, Death Proof still packs a punch. The story follows a crazed stuntman by the name of Mike. Mike allures unsuspecting women into his stunt car, only to kill them in a deadly ride. Meanwhile, Mike walks away with a mere scratch. However, the film see’s Mike meet his match when he tangles with fellow stuntwoman Zoe Bell. It is certainly one of Tarantino’s more obscure efforts, but nevertheless, a pretty solid film.
9. Kill Bill Volume 1
This is certainly not a popular opinion, but neither of the Kill Bill films really did it for me. Kill Bill follows Beatrix Kiddo, who is played by Uma Thurman on her quest for vengeance against those who tried to kill her and her child. The film, which is loved by many is not for those with a queasy stomach, or anyone who is averse to seeing blood. Kill Bill however does demonstrate how creative Tarantino can be with his writing.
8. Kill Bill Volume 2
An extension of the first film in the franchise, Kill Bill Volume 2 See’s Beatrix Kiddo doing many of the same things she sets out to do in the first film. The movie follows her on her journey to finally complete her hit list. Once again, If you are not a fan of blood or gore, stay away from this franchise.
7. Jackie Brown
If I had to describe Jackie Brown in one word as opposed to the rest of Tarantino’s films, I would call it basic. While the rest of Tarantino’s films are alluring because of their interesting plots, and non-linear storylines, Jackie Brown feels lackluster. It feels as if Tarantino was trying to go against everything that had made him so unique up to that point. Even still, Jackie Brown is still action packed, and full of twists that would keep anybody on the edge of their seat.
6. The Hateful Eight
Set in post Civil War Wyoming, The Hateful Eight is the epitome of a modern western. Full of interesting character arcs, and stunning twists. On the flipside though, much like Kill Bill,  The Hateful Eight is somewhat overshadowed by the immense amount of blood and gore that comes with it, and that my friends is why it only secured the six spot on this list.
5. Inglorious Basterds
Inglorious Basterds breaks away from your typical WWII film. Another classic Tarantino story about greed, crazy people, and vengeance, Inglorious Basterds is chock-full of interesting character development, and a twist that you wouldn’t even believe.
4. Reservoir Dogs
A classic crime film with an interesting take, six criminals unknown to each other, are hired to complete a heist. However, when they are ambushed by police it becomes evident that they were in fact sold out by one of the other criminals. This Tarantino’s first big motion picture. The film was still shot on a shoestring budget, and forced Tarantino and his team to get creative with how the movie was shot.
3. Django Unchained
Another Civil War era movie, Django Unchained is a bit unorthodox. The story follows the Django, a slave, and Dr. King Schultz, who together hunt down slaveowners. The story focuses on the bond that Django and Dr. King Schultz have. In a way, Django Unchained is the modern Huckleberry Finn.
2. Pulp Fiction
Possibly Tarantino’s most known piece of work is Pulp Fiction. The story follows two hit men, played by John Travolta and Samuel L. Jackson. The men have a odd proclivity to engage in very philosophical conversation, and deep subjects, yet at the end of the day, their main job is to still kill people for a living. Pulp Fiction is everything that Tarantino is known for, edgy dialogue, non-linear storytelling, and of course, lots of crime and gore.
1. Once Upon a time…In Hollywood
This is certainly an unpopular opinion, but I think Tarantino’s latest work, Once Upon a Time in Hollywood is his best work yet.  The movie attempts to rewrite the crooked history of the Manson Family and the Sharon Tate murder. What makes the movie interesting is that you don’t know that until the last 30 minutes or so. Once Upon a Time in Hollywood pulls off one of the most ambitious twists in recent movie interesting.

There is no doubt that Tarantino is one of the most unique and ambitious creatives in Hollywood. Throughout the years he has pumped out classic after classic, and it doesn’t appear he will be slowing down anytime soon, as rumors of an eleventh film have been spreading like wildfire.