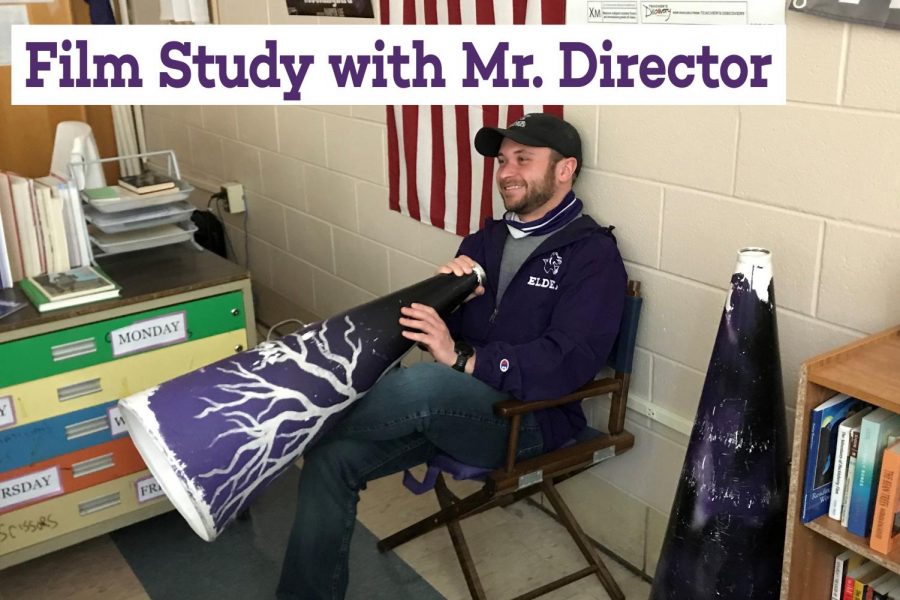 Mr. Quatman, director of the class, whips his students into strict discipline

After years of teaching at Elder High School, Mr. Quatman finally gets to teach his dream class, an old classic that used to offer a different kind of English course: film study. While he is not the only one to teach the class (Mr. James also giving his interpretation of the course), it is a special honor for him. He is someone who not only loves film as a means of entertainment but also as an artistic discipline on par with the literature he teaches in his core English classes.

“We didn’t have anything like it,” says the man himself, “and, along with my interest in film, I thought it would be good for the students to view English through the lens of film.” According to Mr. Quatman, it’s a “very different kind of English class,” where—much to his delight—the students barely notice they are learning concepts otherwise taught in the core curriculum.

The class follows a basic formula: Mr. Quatman gives introductory notes to a movie, the class watches while writing observations, and students finish with an analysis paper, serving as a primer for class discussion. The students aren’t just watching like they would any film, though, as Mr. Quatman leads his class to focus on a specific area of filmmaking, such as lighting, cinematography, and more. Students are also expected to watch a movie on their own time, presenting their “weekly film reports” once a week.

For junior Jacob McCoy, watching movies in class is a holistically different experience than on his couch. “When watching a movie normally, I’m not thinking about what’s going on in behind the scenes, but Mr. Quatman shows us what it takes to put together something like The Godfather,” he explains. Nathan Clark ‘22 agrees: “I’ve learned a lot on how to watch movies seriously, especially with how we focus on one part each movie. It makes everything a lot easier to understand while still enjoying what we’re watching.”

However, not everyone feels he’s gained much knowledge. Brennan Martin, a senior, alleges he’s a “movie expert already,” and he does not “need someone on a podium to tell me how to watch a movie.” Nevertheless, the self-assured student says he absolutely loves the class.

Regarding what films are actually shown in class, Mr. Quatman says about 75% of what he shows in class was decided ahead of time and picked for a certain reason, while sometimes he inserts recommendations from students, giving them some input in what they want to see. Student input may even go so far as to give Mr. Quatman some lessons, as “now and then, student will notice something or have some idea that I never noticed,” making the class an education for the teacher as well.

So far, Mr. Quatman’s second semester class has watched six movies, including many household names like Saving Private Ryan, Titanic, The Silence of the Lambs, and The Godfather, along with relatively less discussed films like Memento, Zodiac, or the documentary King of Kong: a Fistful of Quarters. Matthew Smith ’21, who says he looks forward to the class every day, tells that he enjoyed King of Kong the most, explaining “I want to be just like Billy Mitchell—he’s a winner.”

This year, Film Study has been a big success, offering much more than just a movie class; it is a course that gives students a critical view of cinema that they can use for the rest of their lives. Hopefully, the class will carry on for many more years under Director Quatman’s careful judgement.