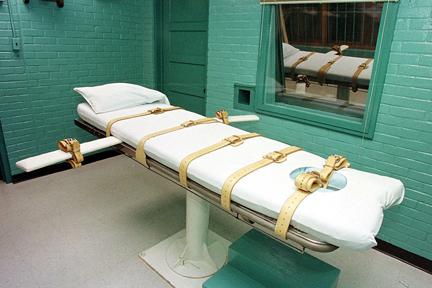 On January 16, 2014, Ohio inmate Dennis McGuire was executed at the Southern Ohio Correctional Facility for the rape and murder of the expecting mother, Joy Stewart in 1989.

Unlike most executions, which are quick and painless for the victim, a mixing of a drug cocktail never before used for the death penalty was experimented on McGuire and caused him to choke for about 20 minutes before he died. It is reported by Dennis’s son, who witnessed the execution along with his wife, that it took over 19 minutes for his father to die and he repeatedly “gasped and snorted” for breath, showing signs that his father was fighting for his life and did not painlessly die as he was expected too.

The new mix of drugs that the State of Ohio was using was a result of the short supply of the drug that is commonly used for executions.

Some people believe that this execution was not only inhumane, but unconstitutional by order of the 8th Amendment, which prohibits the use of cruel and unusual punishments.

Elder’s own Mr. Ploehs, a former teacher of the Death/Life class offered at Elder, believes that not only this situation, but capital punishment in the first place is wrong

“Well, first of all, I am against Capital Punishment,” Mr. Ploehs said, “I believe in a consistent life ethic.”

Mr. Ploehs believes that that the life of anyone should be preserved at all costs, no matter what the person has done to deserve such a punishment.

“Doesn’t that get into an eye for an eye?” He replied when asked why he believes execution is wrong, “the Bible and even our parents have taught us from a young age that revenge isn’t something that we should practice.”

My opinion and Mr. Ploehs’ are similar in many ways. I believe that life is too precious to be taken away by human decision. I am not saying that Mr. McGuire doesn’t deserve a hefty punishment for his morbid crime, but there are other, more effective ways of punishing someone for crimes of Mr. McGuire’s nature.

If I were put into a situation similar to the family of Joy Stewart, I’m sure my immediate reaction would probably be that I want the person who committed the crime to suffer in the same way my loved one suffered. But what good would that do? The best option, in my opinion, would be to let the man or woman serve time in jail for their entire life.

On the other side of the spectrum, I would probably rather receive the death penalty than be forced to serve life in prison. Imagine how terrible it would be to serve time in jail, eventually forgive yourself of your crime, understand that what you did was terrible, and still have to stay in jail for the rest of your life. I can’t even imagine a worse punishment than learning your lesson but still having to rot in jail for a very long time. A punishment like that would make me wish I was dead.

The bottom line of the matter is that killing is wrong. It is a simple moral teaching that is instilled upon us as young children by our guardians and teachers. The thing that baffles me the most about the death penalty is how hypocritical the whole situation is. It is universally accepted that killing another human being is wrong, and is something that we can get brutally punished for, but the highest level of punishment for taking the life of someone is to be killed.