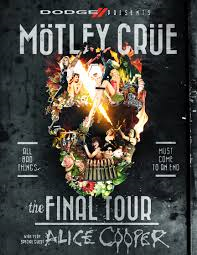 For all you rock heads out there, January 28th, 2014 was a sad day when legendary rock/heavy metal band Motley Crue announced that they would be retiring after a huge worldwide tour, putting an end to one of the most famous and influential acts in the history of rock and heavy metal music.

The band, consisting of lead singer Vince Neil, bassist Nikki Sixx, guitarist Mick Mars, and drummer Tommy Lee, was formed in 1980 and helped pioneer the glam metal scene of the 1980’s. They have released nine studio albums (a tenth will be released before the tour starts), twenty eight singles, have been the recipient of numerous Grammy and AMA nominations, and got their own star on the Hollywood Walk of Fame in 2006.

They’ve even had an autobiography published, entitled ‘The Dirt: Confessions of the World’s Most Notorious Rock Band’, which will soon be adapted into a movie, directed by ‘Jackass’ and ‘Bad Grandpa’ director Jeff Tremaine.

The band is perhaps especially notorious for their many run-ins with the law. Every one of its original members has spent time in jail, and all have suffered from alcoholism and drug abuse, especially described in ‘The Dirt’. But they’ve all come out of it alive and now they’re getting ready to show the world that they only way they go down is on their own terms.

The farewell tour will consist of 72 North American shows, kicking off on July 2nd in Grand Rapids, MI, before going international, and just to let everyone know that the farewell tour is for real, all four members signed a legally binding contract that prevents them from touring after the year 2015.

If the idea of the farewell tour already wasn’t enough to go see the Crue, every show on the tour will be opened up by the great Alice Cooper, aka “The Godfather of Shock Rock.” Cooper is one of the great rock legends who helped pioneer the same music Motley Crue will play on the tour.

I will definitely be there when they come to Riverbend on July 6th, and think that it will be the greatest concert of my life. Motley Crue is one of my all-time favorite bands and I’ve always wanted to go to one of their shows, so this is like now-or-never for me.

The same goes for my Mercy friend Theresa Schill, who is going with me July 6th and had her own thoughts on the band’s retirement and legacy,

“On a scale of how badass they are, I give Motley Crue as a band a 7 or 8 out of 10, but their concerts get a 10/10, especially when Tommy plays the drums upside down,” she told me. “I’m definitely going to the concert when they come to Cincinnati. I think it’s good for their farewell  tour since the band doesn’t do too much together anymore, that I’ve been aware of, and I haven’t heard anything new from them in a while.”

The most remarkable thing about Motley Crue’s farewell tour is that it shows that no matter how many arrests, fights, arguments and obstacles they had to deal with, they still stuck together as a band, in a world where bands get torn apart over these kind of things (KISS, Guns n Roses etc.), and show that nobody can hold down the world’s most notorious rock band of all time.

And if you don’t agree with that statement, then in the words of Vince Neil, “Don’t go away mad, just go away”.