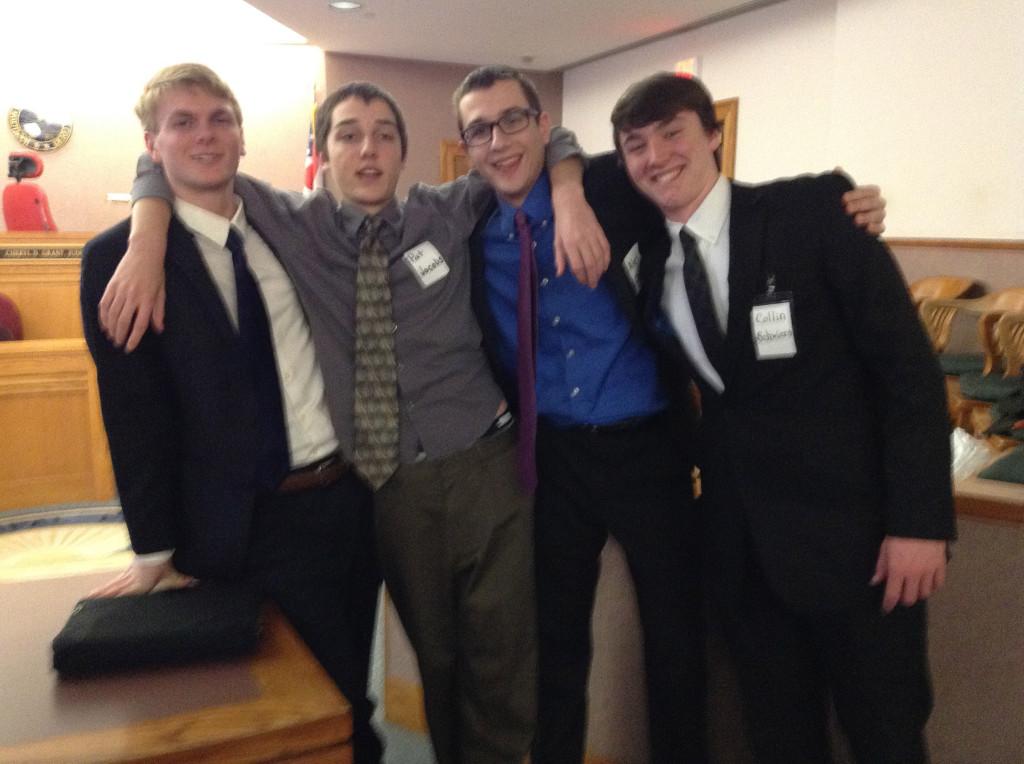 The Mock Trial team has been practicing its case since early October, and just recently they competed in the district competition at the Hamilton County Courthouse. If you do not know much about Elder’s Mock Trial team, it is actually comprised of two teams: purple and white.

The coaches of the Mock Trial team are three Elder grads whom are all practicing attorneys. The coaches are Rick Rinear, Brian O’Connell, and Brett Renzenbrink. The staff moderator is Sharon Montgomery.

This past week, the team competed at the Hamilton County courthouse. The team ended its season at the courthouse with three individual wins. Harry Laiveling and Michael Kay won outstanding attorney awards for their trials, and Brad Murphy won an outstanding witness award.

Earlier in the season, both the purple and white teams competed in the University of Cincinnati Mock Trial tournament. The purple team placed fourth overall in the competition of over twenty schools.

The new member this year whom was given a spot on the purple team is Brad Murphy. Brad has been one of the star performers this year, competing for a team with very high expectations. He also won an award at the University of Cincinnati Mock Trial Competition for being an outstanding witness.

Mock trial offers two one-thousand dollar scholarships to Elder for students who have done an outstanding job throughout the season. Brad is definitely in contention for one of these scholarships along with the 11 other members eligible, but a personal opinion is that Brad has done exceptionally well this year.

Every year, to wrap up the season, the whole team has dinner at Boudinot LaRosa’s to discuss the year’s results and to make projections for next year. Also, at this dinner, the two 1,000 dollar Elder scholarships are given to underclassmen.

Though the season has come to an early end, overall it was a positive season for the team. New members have joined the team and are doing exceptionally well. Given all of the practices cancelled due to snow, no complaints can be made about this season. Still, it would be great if the team could get some new recruits for next year.