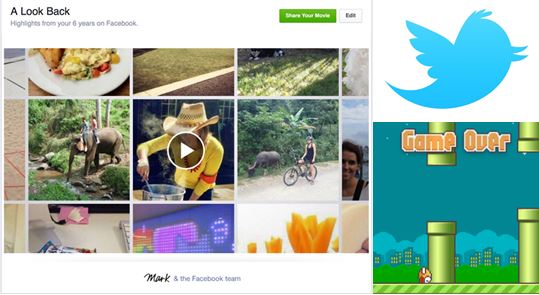 Social media has seen some big changes so far in 2014

It has only been a month into 2014, and social media sites and apps have already made some noticeable changes. In a growing world of technology it’s almost as if a site has to change every month or so to stay up with competitors. Nonetheless, the trivial sides of our brains will never get tired of new add-ons, designs, apps, and so on.

Facebook used to be the site that topped all others when it came to social media. Everyone was on all the time. To this day even I personally find myself logging onto the site frequently even though neither I nor anyone else is really posting anything. In short, Facebook has lost most of its users to Twitter.

To combat this problem Facebook has recently released an app worth checking out. Titled “Look Back” the app gives users a 60 second overview of the most popular posts they made also along with their most liked photos. This app is more funny than anything, especially when people look back to see just how differently they typed during the beginning of their social media days. “Truth is” anyone?

With nothing more than little bit of a design change, Twitter is still the biggest social media site. In my opinion this has a lot to do with the fact that people don’t seem to want to read more than 140 words at a time- this is real problem but that’s another story.

Twitter is nothing more than a business that knows how to attract people. Unless Facebook decides to really change a lot of its features I see Twitter being the big name site for a few years. That is of course until the next social media site comes along.

If Facebook and Twitter aren’t for you, games and apps might be up your alley. What is the big game so far for 2014? It’s nothing more than a bird going through pipes. Unfortunately, “Flappy Bird” has been taken down by creator Dong Nguyen. Nguyen claimed that “he just can’t take it anymore”. As of Sunday the game was taken down after not even being up for two weeks. Popularity for the game was huge in just it’s short amount of time.

The beginning of 2014 proves just how much of a staple the “fun side” of the internet has become in many people’s lives- note the word fun, so, don’t take this stuff too seriously. Unless you were that hardcore of a Flappy Bird fan.