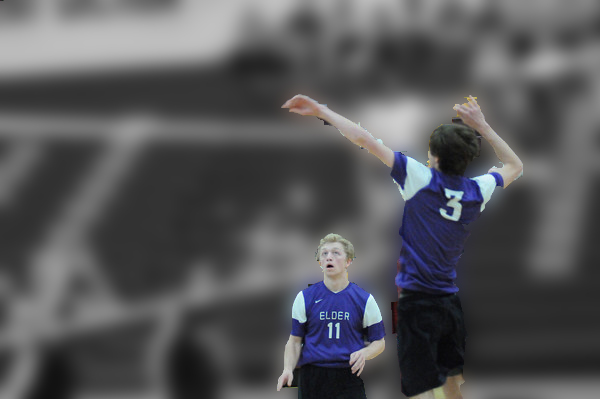 Caption for the photo: Setter Nathan Herdeman looks on in awe as Nortmann goes for the kill

The Elder volleyball team has been one of the most successful teams at Elder in the past few years, and it is looking as though this year will be no different.

Last year, the volleyball team had a regular season record of 15 wins and 8 losses, which is probably an average season for the panthers, but the real story was in the post-season.

Mr. Tierney, the head volleyball coach, said “It was very pleasing to come back and beat two teams in the state tournament we had lost to earlier in the year. I think it was a very rewarding experience for the members of the team.”

The volleyball team then had to play Hilliard Darby in the state finals: a team they had already lost to twice in regular season play. Sadly, the Panthers lost after four games but Mr. Tierney believe that the team player their hearts out and that if they would have won the fourth game, anything could have happened in the fifth.

This year, the panthers are greeted with a new season that promises a lot of hope. Last year’s team was comprised of many juniors and only a few seniors, so a majority of the starting players are returning.

Ben Luebbe’s thoughts on the team were that “The team should be great considering last year was dominated by juniors, and also had a few sophomores that will be returning.” He also thinks that this year the team’s main rival will be St. X because their team is in a similar situation to ours returning many junior players.

A few of the key players this year will be Matthew Nortmann, Ben Smith and Nathan Herdeman. All three will be seniors this year and each played for Varsity last year as juniors.

As the season quickly approaches, the team has been preparing for tryouts with lifting, jump training and open gyms. On top of this, many of the players play for club teams in the winter and summer so that they may retain their skills year round.

Though the team hit a few bumps in the road on the way to state last year, it should be a bit of an easier ride throughout the season this year due to the already-developed chemistry of the players.

This year promises to be pleasing for the fans, players and Mr. Tierney as the team is looking to be one of the best Elder has had. Get out to a game and cheer on your favorite volleyball team as they spike, dig and ace their way to victory this season.