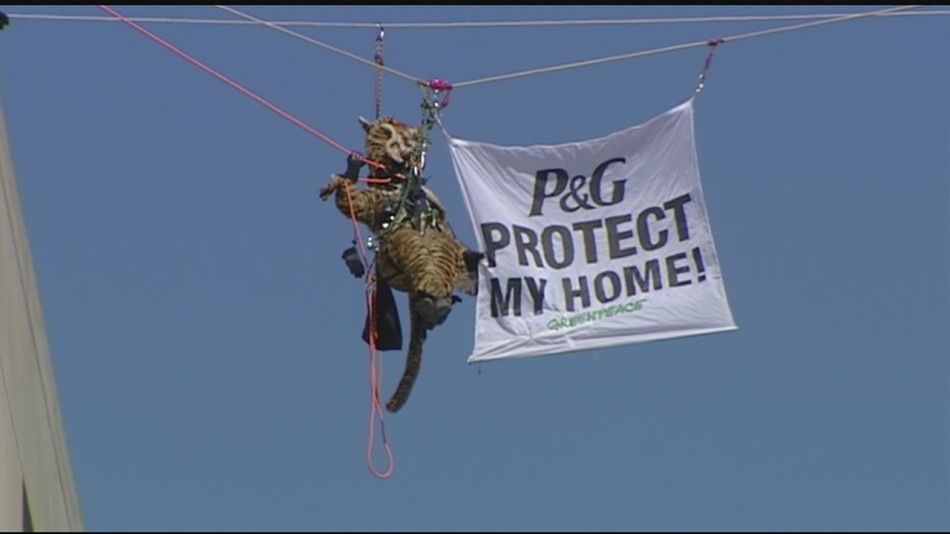 Nine activists of the environmentalist group Greenpeace were brought before the court last Wednesday, after a flamboyant protest stunt the day before. Members ziplined between the Proctor and Gamble headquarters’ twin towers in Cincinnati, hanging banners on the buildings. One protester dangled from a zipline between the two towers, dressed as a tiger.

Greenpeace accuses P&G of causing the destruction of Indonesian rainforests in order to acquire palm oil. They wanted to call to attention the company’s environmental impact and make more people aware of the situation.

According to the acivists, P&G has been buying palm oil from the BW Plantation group, a group that allegedly has little regard for the tigers and orangutans of the Sumatran jungle.

This is by no means the first of Greenpeace’s environmentalist escapades. Founded by anti-war activists in the 1970s, Greenpeace now has over 2500 employees, and can easily afford the cost of bail. Greenpeace’s U.S. research Director, Mark Floegel, stated “We don’t consider the bail an expense, because we’ll get it back when we show up to court … and we always show up to court.”

The relative ease with which the activists accomplished their goals brings into light the effectiveness of P&G’s security. The Greenpeace members simply walked in wearing business attire, and then proceeded to wreak havok.

“Obviously, in light of this, we’re taking a closer look at our security,” said spokeswoman Lisa Popyk in response to these accusations. P&G will most likely beef up their in-house security in response to this, but the damage has already been done.

Whether this will really call to attention the issues Greenpeace was trying to push has yet to be seen. As of right now, the main focus of attention has been the act itself, rather than the message behind it. While something should be done about the treatment of rainforests, doing such a flashy protest isn’t the way to go. This immature act of vandalism will perhaps cause more harm than good to the environmentalist cause.