Kennard to take talents to Durham 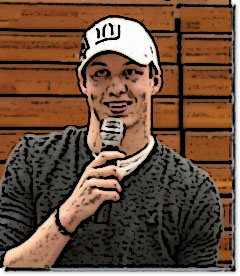 Luke Kennard, the number two player in the state of Ohio for the class of 2015, recently committed to play basketball at Duke University. Kennard, a junior at Franklin High School, chose the Blue Devils over the likes of Kentucky, Michigan, Louisville, North Caroline, and Ohio State.

Kennard is listed at 6′- 5” and plays shooting guard, but it has been speculated he could make the move to point guard in his time at Duke. On why he chose Duke, Kennard told ESPN.com, “I felt comfortable, not only with the coaching staff at Duke, but also the campus and the atmosphere.”

“The culture matched what he was looking for, and it felt like a true family atmosphere,” his dad said. “He was going to wait until April or May, but he visited all the schools on his list and now he is ready and at peace with his decision.”

Kennard will certainly be receiving some of the best coaching in the country from Coach Krzyzewski and his staff. The numbers he put up this year certainly attracted the attention of Coach K and other top coaches around the country, as he averaged an insane 40 points, 10 rebounds, and four assists per game. These numbers helped him to capture Mr. Basketball and Gatorade Player of the Year honors in Ohio.

This decision comes earlier than expected, as Kennard is the first 2015 commitment for Duke, who just landed the No. 1 recruiting class in the nation for 2014. It seems Kennard will likely be the first of many top players who will take their talents to Duke in the coming years.

Kennard definitely has the size and talent to play at the next level. It is possible he could even see some playing time his freshman season, if some of the top rated freshman decide to take their talents to the NBA. Regardless, it will be pretty neat to watch Duke on TV and get to someone from around here play for them.