April 20th has a history 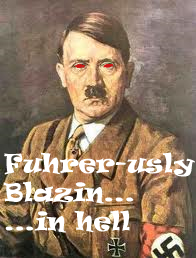 Hitler was born on April 20th, which later became a weed "holiday."

Of all the year’s holidays, Easter seems to switch around the most. Over the years, it has moved all over March and April. This year, Easter Sunday is on April 20th.  While it’s a great time to find Easter eggs, eat candy, hang loose after Lent, and be with family, there is more happening on Easter than meets the eye. April 20th, known as 4/20 in cannabis culture, has also become a weed smoking “holiday” of sorts in North America. However, could it be that April 20th is more sinister than Easter eggs and marijuana?

On Easter, Christians celebrate Jesus’s resurrection from the dead. In 2014, that celebration happens to fall on the birthday of history’s most notorious dictator. On April 20th, 1889, Adolf Hitler was born in Braunau am Inn, Austria.

In 1914, he enlisted in the German Army to fight in the First World War. Though he was usually far from the front lines, he was present at many important battles, including the Somme, where he was wounded. He resented the Treaty of Versailles and politicians whom he blamed for Germany’s loss in WWI

At 11:19 a.m. on April 20th, 1999, the Columbine High School massacre became one the most infamous mass killings in American history. On that Tuesday morning, seniors at Colorado’s Columbine High School Eric Harris and Dylan Kleibold walked into the school and started shooting. They were armed with explosives, knives, shotguns, a pistol, and a rifle.

At approximately 12:08 p.m., almost an hour after the tragedy had started, the two deranged shooters killed themselves with gunshot wounds. Not including them, 12 students and one teacher had been murdered. Twenty-one students were injured in the attack.

The massacre would become synonymous with school shootings and it also put the spotlight on gun control, bullying, Goth subculture, violent video games and violent music amongst other things.

Thankfully, no one has to worry about Adolf Hitler’s ghost or a high school massacre on April 20th. Just remember, when you’re celebrating Easter, stay off the grass!