2015 game will be up for negotiation 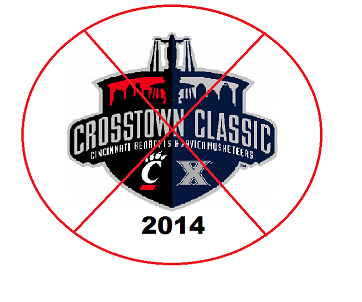 The 2014 Crosstown Classic will be cancelled

Unfortunately, it looks like one of the most intense rivalries in college basketball could be coming to an end

The University of Cincinnati and Xavier University both announced on March 31st that the 2014 basketball matchup between the two schools will be cancelled, but will be up for renegotiation for the scheduled 2015 matchup.

After the infamous 2011 game, where a brawl broke out between players of the opposing teams, UC and Xavier signed only a two-year agreement for the 2012 and 2013 games, both of which would be played at US Bank Arena , and would have the name changed from ‘Crosstown Shootout’ to its current name, ‘Crosstown Classic’.

The cancellation comes as an effort to get rid of the bad blood between the two schools that apparently still exists as a result of the infamous 2011 game.

They decided to play the game at US Bank Arena to see how fans of both schools would behave on a neutral court, and that the behavior of fans from both teams would be a factor in whether or not the game will continue.

Unfortunately, in the end the schools decided that the game would have to take a year off before the future of the rivalry could be officially determined.

“While the fans will certainly be disappointed I think the decision will have a positive impact on the series in the long run”, UC head coach Mick Cronin told Cincinnati.com. “If the right precautions are taken to ensure the safety of players and fans, then I think it’s definitely the right decision to take a year off.”

“While I ultimately disagree with the decision, I entrust that Xavier University and the University of Cincinnati both are making the right choice”, said Xavier head coach Chris Mack. “I think that our rivalry with UC is one of the best in college basketball, and it would be a shame for that to be discontinued in the future.”

“Besides”, Mack added, “I felt like our recent luck we’ve had against the Bearcats was going to run out soon anyway.”

Personally I think the cancellation is just one big April Fool’s joke, because there’s no way you can cancel the most treasured and storied rivalry in the history of Cincinnati basketball, no matter what the reason is or who tells you no.

The one thing I did like, however, was that the article was very well written. I think whoever wrote it has a real future as a journalist.

No matter whether your school’s colors are white and blue or red and black, there’s no bright side to the cancellation of the Cincinnati-Xavier game this year, and hopefully the cancellation will only be for this year and will be reinstated in 2015.