Immigrants or Refugees?: The effect of the Cartel Wars 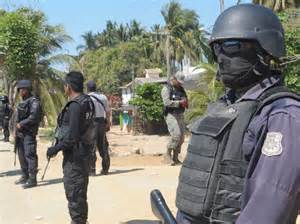 Mexico is a country that has not been in recent headlines like Syria and Ukraine. There are no day by day updates on the war effort or the constant stream of news from the White House on America’s roles in these conflicts. Mexico’s war is a secret one, with the news and media turning a blind eye to the terrible truth until we see the result in the thousands of Mexican illegal immigrants.

The war in Mexico, fought by the government against the many drug cartels of the country, has been raging for nine years, from 2006 to the present. This caused thousands of deaths and even more wounded.

The most familiar result is the large amount of Mexican citizens that have hopped the border and have now set up living in the U.S. This has been a touchy subject of debate between politicians in the U.S. about how to deal with so many undocumented residents. They are called illegal immigrants and are often taken from their new homes by the government and dropped back into the country they were so desperately attempting to flee.

They flee a life of being ruled by a corrupt government, or even worse, living in a region controlled by a cartel. Life in Mexico is a life living in the limited government controlled areas or in the areas that the cartels are fighting to expand into. And living in the cartel controlled regions often mean that in some way, shape, or form working for their cartel rulers; and the same is expected for their children. That is why so many leave these areas; they are fleeing a life of forced labor for both them and their children, and the ones that can’t manage to make it over the border with their children often send the young children alone.

However many others remain in America, setting up large communities in already established towns and cities. The Price Hill area of Cincinnati is, perhaps, the best example to show the effect of this immigration. Over the last decade the Price Hill area has had more had more Latin immigrants move into the area, to the extent that some of the local churches now hold Masses entirely in Spanish.
Of course there is the option to stay in Mexico, but that has harsher risks than hopping the U.S. border and dealing with the American government. From the years 2006-2010 close to 40,000 people were recorded as killed in the Mexican cartel wars.  Not counted were the thousands of unconfirmed deaths, the wounded, and the untold amount of those kidnapped to be shipped elsewhere in the growing human trafficking market. The murder and kidnapping rate in Juarez Mexico is the highest in the world for women; a place that is not even an hour drive from El Paso, Texas.

This large amount of death, war, kidnappings, and a generally dangerous environment have forced many families to flee for the states, while many more send their young children alone in the hopes of leniency of the government to keep them here.
When in our country’s over 225 year history have we ever let such atrocities and such war effect a region so close to our doorstep, and yet turn a blind eye?