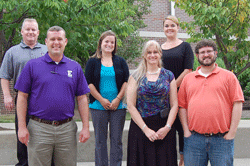 With the 2014 school year in full swing, the air conditioning system and large flat screen monitors are not the only recent additions at Elder. There are many new faces around the Elder campus, and quite frankly, we were growing tired of hearing the constant “who’s that?” in the hallway as they walked by.

So we decided to investigate and interviewed some of the new faculty.

We headed into the development office, where we talked to Amy Iori and asked her some questions. Mrs. Iori graduated from Seton in 1998.

Before working in the development department at Elder, Mrs. Iori worked for the American Heart Association.

We asked her how she was liking her new job at Elder. She said, “I love it so far, and I really love the people I’m working with.”

We also felt this was a perfect opportunity to ask Mrs. Iori a question that most of us at Elder want to know, “What exactly does JP Owens do?”

She answered, “Well he comes in really early, he always eats uncrustables, he hates vegetables, and he is the unprecedented dodge ball champion of the school.”

So not only did we get to know Mrs. Iori, but we also got a little insight into the activities of JP Owens.

Another new faculty member at Elder is Erin Lind, the new Collegiate Coordinator, who took over the job that was previously performed by Mrs. Kennedy. Mrs. Lind graduated from Seton in 2003, and went on to Mount Saint Joseph and Xavier for college. Before she started working for Elder, Mrs. Lind worked at the Hamilton County Courthouse.

When asked how she was finding her new position, she stated, “I love it at Elder. It’s very friendly environment and it’s easy to feel comfortable here.”

We asked Mrs. Lind about her job as a Collegiate Coordinator, and what the job involves. She told us that she has a variety of responsibilities including preparing college visits and discussing college plans with juniors and seniors at Elder. The job sounds like it involves a lot of hard work, and were not only looking forward to talking to Mrs. Lind about College, but also happy she’s here at Elder.

Jay Arns is the new face in the English department, and also is a Panther himself, graduating in 2001. Mr. Arns previously taught at that school over on North Bend Road, and is happy to return to his alma mater.

We asked Mr. Arns what kind of activities he was involved with while he was a student at Elder. He was a member of the Key Club, President of the National Honors Society, and Homeroom representative. He was also a stud on the Volleyball court, and was on the team that won state in 2000.

Transitioning from being a student to teaching at your alma mater’s biggest rival seems like a big challenge. We asked Mr. Arns how about that experience.

“It was interesting. I was struck by how similar the two school really are.”

He also mentioned that he shared a “secret handshake” with the other Elder graduates that teach there. Even in the halls of Saint Xavier, Mr. Arns never forgot that he was truly an Elder Panther, and we’re glad that he’s back here.

We also want to welcome Mrs. Kraeling, Mr. McGregor, and Mr. Schroer ‘94 to the Elder family, and hope that they are having a good start to the school year. Now that we’ve met the new faces around Elder, we hope that some of the “who’s that” in the hallways will come to an end, and that all the new staff feel welcome at Elder.