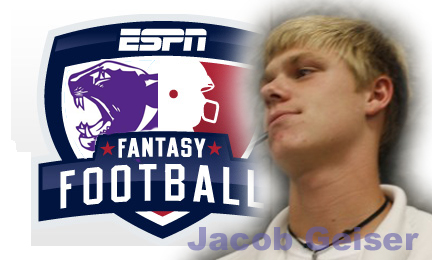 The man, the myth, the legend.

After another week of Fantasy, big name players have gone down. RGIII, A.J Green, Knowshon Moreno, and Jamaal Charles. Those guys will be missed if they miss serious time. Green seems to be okay, Charles is debatable, and the overwhelming problem is with RGIII and Moreno. Moreno is down for at least 4-8 weeks which will kill the Dolphins offense degrading the value of some players. RGIII is treading thin water, Kirk Cousins has the chance to take his spot in Washington. Look for a QB battle when he returns. The scandals that rocked the NFL have been huge, Adrian Peterson has been brought center stage. He is out this week, which will hurt a lot of owners. Now for the picks.

RB: I had my first running back choice right this year, DeMarco Murray deliver a huge game against the Titans, and I wouldn’t be surprised if he had one this week against the Rams. But this week I really don’t like many of the matchups for running backs, but I like Giovanni Bernard against none other than the Titans. Not a north south runner like Murray but he should have success. Bernard opens up the Bengals offense with all the screens and tosses to the outside. I like Bernard to tear up a weak Titans D.

WR: Julio Jones had a touchdown which should’ve helped your team giving me another decent pick there. This week I like Brandon Marshall.  (I kind of hinted to it when I talked about Cutler) He had only 48 yards receiving but had your basic three touchdowns. Once again, it will be an awful Jets secondary versus Cutler and Marshall who is Cutler’s favorite target. Look for Marshall to have another great week.

TE: Antonio Gates who had a big week against a great Seahawks defense, scoring three touchdowns, is my pick. Gates is one of Rivers’ favorite targets. He is a huge threat in the red zone. I like Gates to have a big week because of his recent success against the Bills, scoring two touchdowns in his last game against them.

Flex: Darren Sproles, because the guy straight cooks. McCoy and Sproles are probably the best two back combo in the league. Sproles can run, and catch; so can McCoy but his speed is second to none. Being the first ranked back through the first two weeks has caught everyone by surprise, if you don’t have him in your lineup by now he needs to stay there. Sproles will have a big game against sub-par Washington defense.