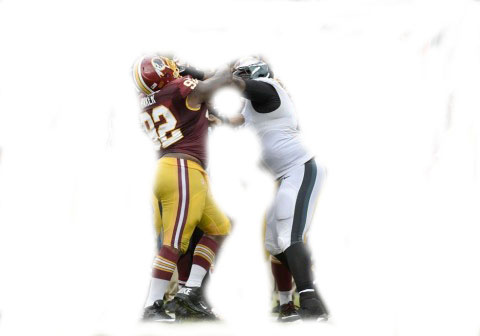 Redskin’s defensive tackle, Chris Baker, got caught in the hot seat on Sunday, September 21 after laying the lumber on Nick Foles, the Eagles quarterback. It all started as a simple play but when the interception occurred, the play began to escalate very quickly.

After releasing the football, Nick Foles was jogging towards the defensive back that intercepted the ball. Out of nowhere came Chris Baker, running out of the corner of the screen making a B-line towards the QB. He hit Foles as hard as he could with his shoulder and literally knocking him off his feet. Baker ran off the field celebrating and not knowing what would happen next.

Chest bumping his buddy, here came all the Eagles linemen protecting their quarterback. The brawl started when Jason Peters, the Eagles offensive tackle pushed Chris from behind. Baker responded with a shove to the face and then they grabbed each other’s facemasks and started pulling down on them. It was basically a full out brawl at this point and the refs kind of gave up when one got caught in the middle of it.

The fight went on for several minutes but it was an exhilarating several minutes in that football game. There were two fines given from the fight. Baker received a fine of $8,268 while Peters received a fine of $10,000. Some may say that is unfair but Jason punched Baker in the face. He knew what the consequence was going to be and he continued to proceed in doing it.

Catching up with Peyton Ramsey about the topic was interesting since he is also a QB like Nick Foles.

“I think that there were many things wrong with that hit. He knew Foles had no chance of getting into the play,” said Ramsey. “All the fines were necessary and I think everything that should have happened, happened.”

We could all agree with Ramsey on that one. The hit was very unnecessary and uncalled for. I would have done the same thing that Peters did if my quarterback just got clobbered. I’m not a 350 pound NFL lineman though so I don’t have much else to say about what I would’ve done. I know that I wouldn’t have gone down without a fight though.

Either way they can’t rewind to that play and try to get the call right. Both Baker and Peters will pay their fines and they will go on. No harm was done and Foles wasn’t hurt but the penalty call was made and I still agree with it. I mean no matter whose side you are on, it was still pretty fun and exciting to watch the scrum that Sunday evening.