Highlands on the horizon 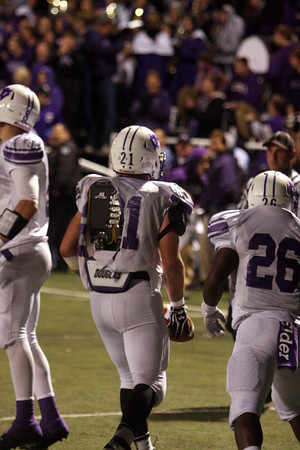 Chris Schroer '14 and his ripped jersey in a game against Highlands during the 2012 football season.

On October 24th, the Elder football team will travel to David Cecil Memorial Stadium to take on the Highlands Bluebirds.  This game will be the eighth matchup between Elder and Highlands.

Elder is 6-1 all-time against Highlands dating back to their first matchup in 1999 when Elder defeated Highlands by a score of 35-14.  Elder would play Highlands again in 2000, 2004, and 2006 until a series was established in 2011.  The only loss to Highlands was a 34-29 nail biter during Elder’s 2011 season in which they were 2-8 for the year.   Highlands would later go on to win their 21st Kentucky State Championship that year.

Elder was also a thorn in Highlands’ side during the 2012 football season.  Elder handed the State Champion their only loss of the season, a 38-24 beating at Highlands.  Highlands would win their 22nd state championship with a tarnished 14-1 record.

With a recent history of Elder “upsets”, is the Elder-Highlands game becoming an up and coming rivalry?  With the game being late in the season, can it join the ranks of a GCL matchup or even a game against Oak Hills?

“Highlands is without a doubt one of the best teams in Northern Kentucky,” said Hammersmith. “They always have Elder circled on their schedule, and the game is important for both teams, so yes I would say they are becoming yet another respectable rival.”

Although Highlands has already lost this season, the game will still hold a significance for Elder’s playoff chances.

Hammersmith added, “Just because Highlands isn’t one of the schools that sophomores can talk smack about on Twitter doesn’t mean that the football game is any less important for the team and the school.”

Highlands will be led by quarterback Beau Hoge, son of ESPN analyst Merril Hoge.  Hoge saw some action in the game last year against Elder and wants to avenge past losses to the Panthers.  Highlands is considered to be the favorite by those who haven’t experienced the Portable Pit.  Elder will look to prove the doubters wrong and continue a strong season into the end of the year.