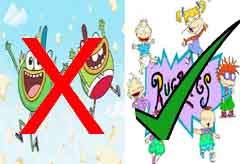 Old Cartoons, such as the "Rugrats", are being enjoyed more than newer cartoons are

Cartoons are a way for kids AND adults to relieve their stress. The lighthearted nature of these shows have been allowing everyone to have better days since their beginning back in the late 1800s.

The Golden Age of cartoons was ushered in with the arrival of some well-known cartoonists, such as Walt Disney, into the world of animation. With the rise in popularity, they began to increase in prominence. Walt Disney began to create cartoons because of his use of his wild imagination. He loved the idea that he could make anything happen with animation that he couldn’t make happen with real people. Walt Disney and his company helped make cartoons what they have become today.

The cartoons of the 1960s and 70s, such as Scooby-Doo, The Jetsons, The Flinstones, and Looney Tunes, were some of the best cartoons to ever air. Many people would consider that the “Television era” of cartoons to better than the cartoons of today. But cartoons still play a vital role in many peoples television experience through the adult and children cartoons that are still being created.

As I was watching with the anticipation of my childhood, I realized that it was quite possibly the worst show I have ever laid eyes on. I was scared that I was beginning to lose my interest in the slap-stick television genre.

Recently, I re-watched the old cartoons that were on when I was growing up.  I realized that it wasn’t the genre that I didn’t like, it was the dumb cartoons that are being played today.

The cartoons that I watched when I was younger included: Rocko’s Modern Life, The Adventures of Jimmy Neutron: Boy Genius, The Fairly OddParents, Baby Looney Tunes, Tom and Jerry, Scooby Doo, Rocket Power, Rugrats, and of course, SpongeBob Squarepants. These shows created the environment that I grew up in. The story lines that each contained was unmatched by any other. With their solid story lines, they also had a plethora of humor linked in with it. I almost always could be found watching TV as a youngster when I wasn’t outside or not home.

Today, it is sad how bad the cartoons have gotten from the perspective of someone who has seen the great ones. The individual story lines of each episode of the new ones are extremely superficial compared to those of my youth.

Junior Brian Smedley agrees. He said, “90s cartoons had better theme songs and each character had something that stood out to everyone, like Timmy Turner’s buck teeth and pink clothes or Jimmy Neutron’s big head. Also, each episode contained a great story that would never disappoint.”

However, some young kids who don’t know the greatness of the old cartoons do not understand what they are missing. My younger cousin, who is in the fifth grade at Wyoming Middle School, told me that he enjoys watching the cartoons of today.

Maybe it is just our generation, who knows what great cartoons look like are so disappointed when we see the new cartoons continuously fail to  live up to the quality of our favorites.

So, the approval ratings will only sink dramatically until the tides change and new cartoons are released for the people who are longing to see the glory days of cartoons can be revived.