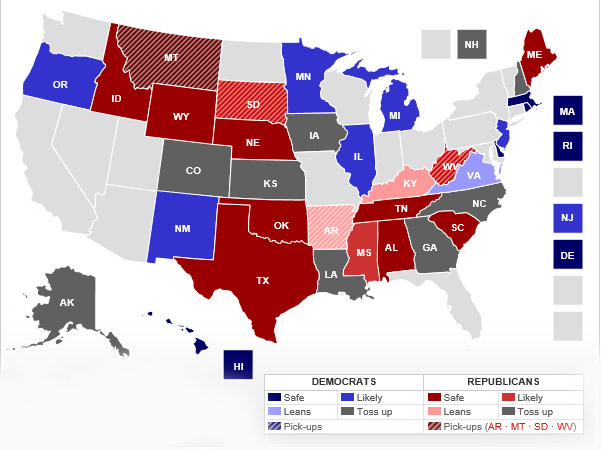 Every two years voters head to the polls to elect new leaders. The Democrats currently hold the Senate and Republicans hold the House. Current speculation says that the Republicans will dominate the elections this year. Experts have said that they will certainly win the House and have a good chance of upsetting the Democrats in the Senate.

For Ohio’s voters, the Republican Party will reign supreme. The gerrymandering of Ohio shows just how dominant the Republican Party is in the state. Only Columbus, Cleveland, and Akron remain “democratic”, meaning these are the only major cities that will predominately vote blue.

However, all of the speculation can only tell us so much. There will most likely be a surprise in these elections. Something that we are expecting to happen will go the opposite way. An upset of some sorts is most likely going to be the surprise. Arkansas’ Senate race is a good candidate for a surprise. Bill Clinton is backing Tom Cotton’s campaign, but Mark Pryor is an Iraq veteran that could be getting a lot of votes.

Like many elections, most Americans will not partake in this event. Even though many believe that it is a civil duty, most will pass by the voting polls this year. 39-42% of Americans will not be voting, compared to presidential election years when turnout is rated at roughly 65%.

Unlike unpredictable sports, the election speculation turned out to be true. The Republicans swept Congress winning in the House, Senate, and in the Governor race. This may cause some trouble for the White House. Barack Obama will either have to compromise with the Republicans on important issues or he will have to wait out his last two years and be a lame duck.

The GOP took 246 seats, the most since World War II. This is good news for Ohioans since we are mostly a Red state. The majority will switch as will the leader and the whip. Mitch McConnell will most likely take over the Leader of the House. Even though he is considered a dinosaur in politics the only real contender to him is Ted Cruz. But even many Republicans do not want him as the Majority Leader. As for Speaker of the House, John Boehner should retain that position. When interviewed after his win, he made a promise to Americans by stating, “It’s time for government to start getting results and implementing solutions to the challenges facing our country, starting with our still-struggling economy.”

Democrats were not blown out of the water this election but they surely lost races that should have been won. In Iowa Joni Ernst was the first woman from the state to be elected, and a Republican. Mark Pryor, a republican, stole the election from Tom Cotton in Arkansas, a toss-up state. This went on for various other states. The wind decided to blow in the direction of the Republicans mast and they sailed to victory.

The Panthers hit the polls yesterday as Mr. Gergen “encouraged” them to. Senior Logan Hutzel voted yesterday along with his classmates, he said it was an easy process; not too long of a wait. When asked if he thinks that it is every Americans duty to vote he said, “Yes, I do. People have fought and died for the right to vote. I think it is extremely important that everyone votes.”

Republicans hold Congress for the next two years. Democrats will be hungry to take back their place in Congress, and speculation says they have a good chance of taking back the Senate and possibly the House. If speculation is as good as it was this year than the Democrats may come back in 2016.