Change is needed in amateur sports

The problem isn't with the athletes or schools, it's the system. 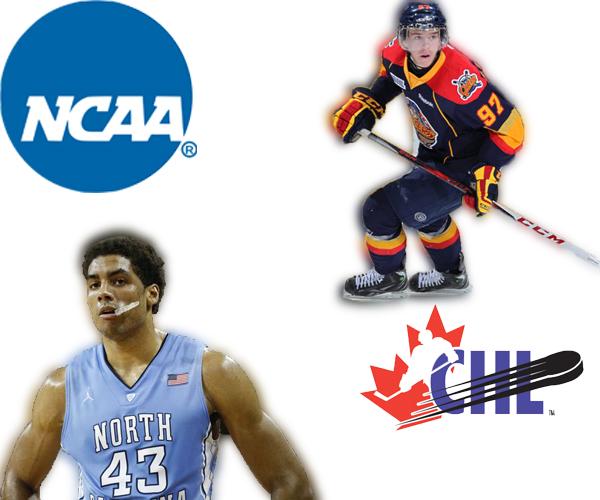 Due to the recent controversy regarding the basketball team at the University of North Carolina, college sports have been a hot topic lately. Most people seem to think that college athletes receive “special treatment” for their athletic ability, and it’s no huge secret that they probably do. Contrary to what the majority of people may believe, I think the problem lies within the amateur sports system and not within the schools.

The NFL, NBA, and the MLB should take a page out of the NHL’s book and implement a “Juniors” system to help improve promising amateur athletes so they can be ready to compete at the highest level after they are drafted.

While college hockey is a viable option for many hockey players to make it into the NHL, most young and promising players opt out of college to pursue an amateur career in Canada’s most prestigious amateur hockey league, the CHL (Canadian Hockey League).

There are many differences between “junior hockey” and college hockey. College hockey players get the same benefits as any other college athlete would. They get a full scholarship to the school of their choice and get to receive a great college education in hopes of pursuing a professional hockey career.

The problem with this for hockey, and every college sport, is that there is usually not a plan B prepared for these athletes. They are playing college sports specifically be able to play in professional competition. That is why “Junior” hockey is so successful in the NHL.

Young hockey players who are talented and lucky enough to be able to compete in the CHL have three leagues within this league to choose from. They can play in the less-popular Quebec Major Junior Hockey League (QMJHL) and spend the majority of their time playing in and around Quebec. The Western Hockey League (WHL) where the players exclusively play teams that reside in western cities in the U.S. and Canada. Lastly, and arguably the league that generates the most talent, is the Ontario Hockey League (OHL), where teams play across the province of Ontario and  in Midwestern American cities, such as Erie, Pennsylvania and Saginaw, Michigan.

One of the main advantages to playing in one of the leagues in the CHL is that you can play at the ripe age of 16. The CHL also focuses much more on the hockey aspect of things and are not in any way affiliated with any high schools or colleges, so the players can focus more on pursuing an athletic career rather than attempting to take on an almost impossible school workload while constantly traveling and practicing.

If more of America’s major sports leagues implemented a system like this, the productivity and maturity of the players would increase astronomically. Not only would you have the experience of moving away from home at such a young age, but you wouldn’t be consistently condemned for academic ability, because while there are many players who are achieving academically, the ones who make it to the pros are the players who are working hard and devoting all of their time to their sport.

We are pointing fingers at the wrong people. The only real flaw is that there isn’t a viable environment for these young men and women to solely work on improving their talent in their athletic ability rather than in the classroom.