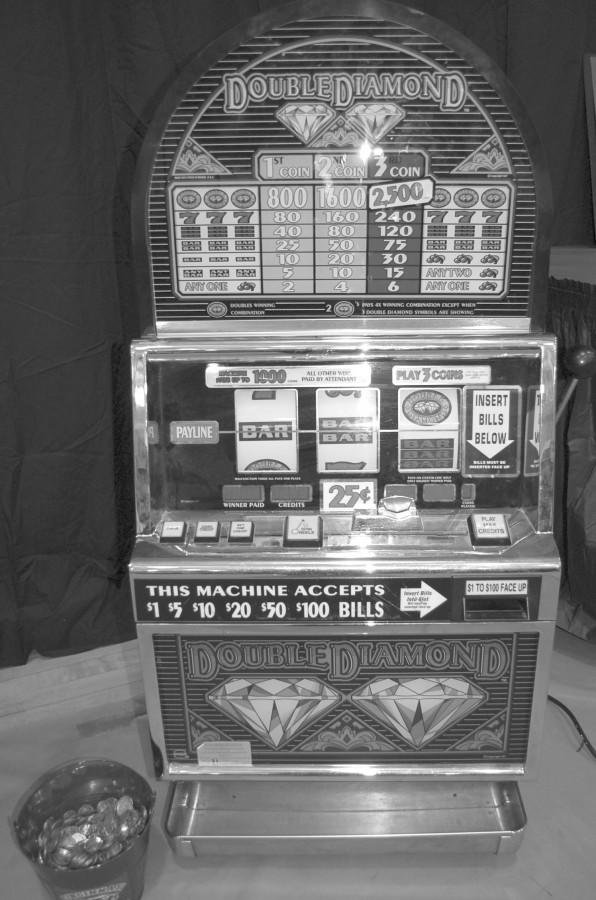 This slot machine sold for $1200, with every penny going to benefit student financial aid

For those future Elder students who will be unsure if they will be able to afford to go to school here, they can rest a little easier knowing that Elderama will be there to aide them in their pursuit of the higher things.

Now in its 29th year of fundraising, Elderama has spent nearly 30 years collecting money for student financial aid, and has allowed so many students to attend Elder that wouldn’t have been able to otherwise.

For those of you who hear announcements for Elderama but aren’t exactly sure what it is, it’s an annual auction where patrons of Elder High School can donate different goods and services and put them up for bid. Every penny earned the past 29 years has gone towards student financial aid, something that is truly amazing and inspiring.

The theme for this year’s auction was “Bright Lights of Vegas”, with the fieldhouse getting decorated Sin City style, definitely a rockin’ atmosphere for an awesome event.

One of the most awesome prizes that was up for bidding was a real life African safari for two! That once-in-a-lifetime opportunity sold for a price of $3000 to go towards student financial aid.

Other big prizes won included a slot machine sold for $1200, broadway series tickets for $1100, a snow blower for $850, and a night at the Hilton hotel with dinner at Jeff Ruby’s for $600 (when you can see him prowling around an Elder game for only $5.)

The prizes were great, but the best bid of the night was one that really mattered.

Guests got the opportunity to donate money to the Family Crisis Fund, in its 10th year of operation, was set up to provide assistance for students who have recently gone through a unfortunate loss in their lives, like a parent passing away or a parent losing a job, and gives these students an insurance that they will still be able to go to Elder.

Principal Tom Otten thought that the evening was a great success both financially and for every guest that attended,

“The evening went very well. There seemed to be a smaller crowd than in year’s past, but it seemed like everyone had a great time.”

Co-Coordinator Tom Reihring gave so much of his time and energy to make this year’s Elderama yet another successful event,

“It was another great night. The crowd was a little smaller than in year’s past, but there were many new faces in the crowd.”

“The highlight of the night was definitely the performance put on by “The Tommy and Hub Band”, with a rocking performance by yours truly.”

Auction coordinator Mary Beth Meyer have a very positive report on the night’s festivities and said that it was great to see everyone having a good time,

“It was a great night with a fun atmosphere. I love to see people show up, enjoy themselves, and give money to a great cause.

“This year’s theme was “Bright Lights of Vegas”. For the price of one tickets, bidders got a chicken and steak dinner, open bar, and the opportunity to bid on a number of fabulous prizes up for auction.

You know when Mr. Otten sometimes tells us to look at the people around you, and that chances are one or more of you are receiving some kind of financial aid? It’s weird to think that Elderama benefits us in more ways than we think about, so let’s try and be more thankful for Elderama and for everything our parents do to help us attend the best private school in the Cincinnati.