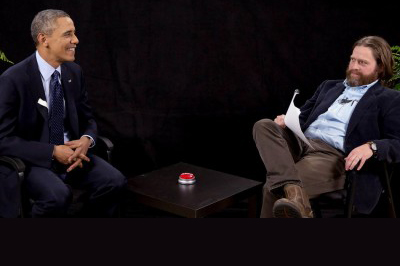 For nine years YouTube has ruled the internet with funny and awesome videos. There have been few people that have been so successful that their own channel has gotten millions of subscribers. This has results in millions of dollars made and some people getting their own websites.

Funny or Die(FOD) has been a media hub for years started by Will Ferrell and Adam McKay. It has multiple videos and video series that are worth watching but Between Two Ferns has kept audiences cracking up for quite some time.

Zach Galifianakis has had us laughing since he hit the silver screen. The Hangover had too many memorable lines to count. Galifianakis brought his talent to FOD and created the hit series Between Two Ferns. The basic premise of the show is he has big named stars on his show and has a fake interview. For the stars being interviewed it is not so great. Galifianakis rips the big names apart with any material he can get. For instance he actually had President Obama on the show, and he asked him, “Did you send Ambassador Rodman to North Korea on your behalf?” Most get fed up and fire back with fat jokes and how it looks like he has a perm. This series is a must watch, this is easily the funniest web series out there and will make regular interviews look boring.

To change gears for sports fans, DudePerfect is the perfect YouTube channel. They all started at a farm while attending Texas A&M. They started doing trick shots off their roofs which got massive amounts of views. This later got national attention which resulted in a clothing line and guest spots at national sporting events. They cover the whole spectrum of sports. Mostly football and basketball but they mix in various others that everyone can enjoy. The trick shots they make are ridiculous, no other word. To the common folk it would take ages to make the shots they do.

Another YouTuber that has made his name by pranking random people on streets, Roman Atwood has been bringing laughs to regular viewers for years now. He has had many sidekicks that have branched out to their own channels, and he even uses his son for pranks which gives us a lot of laughs. For instance he dressed his son up for Halloween with a Mike Meyers look. While someone was lying on the ground acting as if they were dead he would creep up next to them with his fake knife and scare people. Look up Killer Toddler Prank on YouTube and laughs will soon be upon you. Also that fact that Atwood is a fellow Cincinnatian makes it even better.

For aspiring college students and some soon-to-be “frat bros”, CollegeHumor, and Life According to Jimmy are just for you. These channels show what college is like and how partying should be, mostly from what movies told them. Unlike the last two which are real people doing their own stunts these two channels show people acting as other people or having alter egos. They have some good material especially for viewers our age. They are worth the watch and will make you laugh because of the funny situations they get put in.

These five channels are a must watch if you are looking for some short good videos to watch. They will give you laughs and make you want to do trick shots off your roof. But these guys should be considered professionals at their trade so don’t try some of their stunts at home.