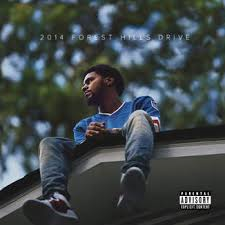 If you have a twitter account odds are you saw something relating to this album this past December. J. Cole, in releasing just his third studio album in December, has finally seemed to have made a name for himself.

When I heard about this album I wasn’t really that big of a J. Cole fan, I mean he has some songs that I liked but I really didn’t think that much of him.

Have you ever seen a picture of something and thought, I need to know what that means. Well that’s the kind of feeling I got when I first saw the cover of Cole’s newest album. Even the name of it made me think and feel like I had to listen to it.

The title of the album is the address of J. Cole’s childhood home in Fayetteville, North Carolina, where he grew up with his mom, brother, and stepfather. Shortly after graduating high school in 2003, the home was foreclosed while J. Cole attended St. John’s University in New York City. In 2014, the rapper re-bought the house for his mom, marking Cole’s first home purchase.

Cole really didn’t put any promotion towards this album. Having no singles on it, and having no features really can be seen today as ludicrous. With his album being out for nearly a month, and already having the album go gold the rapper tweeted, “The #’s are humbling. It’s a win for all artists and fans and a clear message to the industry. No singles no features. Stop serving trash.”

I listened to the album from start to finish and needless to say was very impressed. Every song was good to me, they all showed different meaning, and seemed to tell a different story. Overall the main part that impressed me was that Cole was able to do this without any features. On Cole’s other albums the best songs were his singles, and those tended to be the main focus of the album. Everything about this album just showed a fresh new start for Cole that seemed to be heading in the right direction.

Overall, this album has made me a J. Cole fan, and I can’t wait to see if he will be able to top this effort with something even better. If I had to rate this album on a scale of ten I would give it a solid 7.5, which don’t get me wrong is really good. 2014 Forest Hills drive was easily the best rap album of the year, I don’t think any other albums could really compare too it.