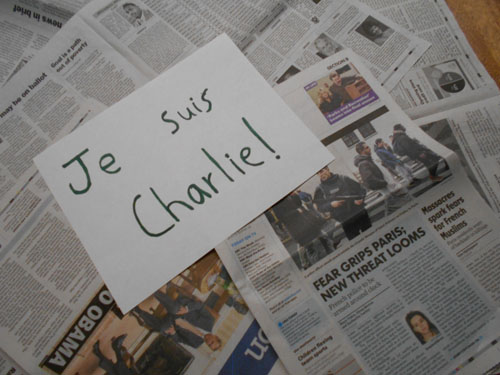 On Wednesday, January 7th, France experienced its worst terrorist attack in five decades. That morning, two heavily armed gunmen opened fire at the office of the Charlie Hebdo satirical magazine in Paris during an editorial meeting. Twelve people, including editors, journalists, and two police officers, were killed in the attack.

The next day, a street sweeper was injured and a policewoman was killed in a shooting in south Paris. Later that day, a gas station in northern France was robbed. The two robbers fit the description of the brothers suspected in the Charlie Hebdo attack, Cherif and Said Kouachi.

The next day, the Kouachi brothers took a hostage in a printing house in the village of Dammartin-en-Goele, 30 miles northeast of Paris. A third gunman, Ahmedy Coulibaly took hostages and killed four at a kosher market in an eastern section of Paris. Coulibaly threatened to kill his hostages if the police attempted to take action against the Kouachi brothers in Dammartin-en-Goele.

Around 5 p.m., police stormed the printing plant. The Kouachi brothers were killed, and their hostage was freed. Moments later, police moved in on Coulibaly in the kosher market. Coulibaly was killed, and 15 hostages were rescued.

Over the course of three days, 17 people were killed, not including the three terrorists. There has been an outcry of support for the victims, both across France and around the world. The phrase “Je suis Charlie,” French for “I am Charlie,” has become a very popular motto of solidarity.

On Sunday, a unity rally in Paris drew an estimated two million people, making the rally the largest rally in France since the liberation of Paris in 1944.

The initial shooting was in retaliation for Charlie Hebdo’s publishing of cartoons insulting the Muslim prophet Muhammad. A satirical magazine, Charlie Hebdo often lampooned not only Islam, but also Catholicism, Judaism, and the French political right.

Senior artist Julian Gregory explained, “I think that artists shouldn’t be censored, but the objective shouldn’t be to offend or offer hate or infringe on another’s religion. That said, what would count as fighting words or harassment against a particular group does not constitute the violence that took place.”

In an act of defiance, Charlie Hebdo will continue publication. Many would call it courageous, others would call it stupid, but the magazine’s next issue will again include cartoons of the prophet Muhammad.

Senior Andrew Humphries said, “I’d say it’s a little of both. They have seen firsthand the reactions they can receive, so I think it’s stupid to put more employees at risk. On the other hand, it’s great that they won’t let threats and terrorism silence their work.”

The attacks also come as Islamophobia is on the rise in France, which is home to the largest Muslim minority in Western Europe. There is fear that the attacks will cause a surge in anti-Islam feelings, worrying millions of French Muslims. Already, mosques across France have been attacked with gunfire, arson, and vandalism.

Humphries expressed concern and explained, “Hopefully people that are aware or educated on the subject won’t place unjust hatred on non-extremists or the people not responsible.”

It’s unclear what the near future will bring France, but one thing is certain, that we will remember the victims of the January attacks. Je suis Charlie!