After a year of crisis, Ukraine ponders an uncertain future 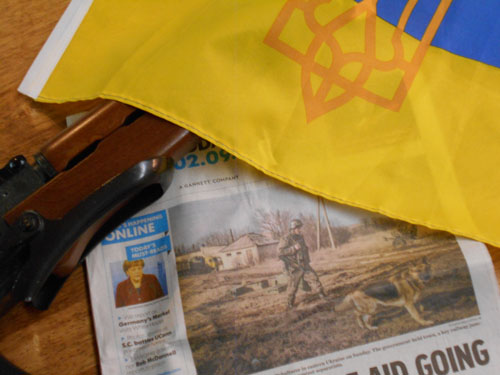 In late February of 2014, the Euromaidan movement reached its bloody climax in Kiev. The movement began in November 2013, after Ukrainian president Viktor Yanukovych chose not to sign the Ukraine-European Union Association Agreement, instead keeping Ukraine firmly in the Russian orbit.

Unlike Ukraine’s Orange Revolution in 2004-2005, the 2014 revolution was far from bloodless. February 18th was the first of three days of clashes between police and protesters in Kiev. The street battles left more than 113 people dead, most of them being civilian protesters. On February 22nd, the government was overthrown, and President Yanukovych fled Kiev.

A year since the Euromaidan Revolution, a simple question arises. Where is Ukraine now? Is Ukraine better or worse off than it was before the revolution? That simple question has a complex answer, and in many ways, Ukraine is both better and worse off.

One of the causes of the 2014 revolution was the corruption that plagued the government since the country gained independence from the Soviet Union in 1991. Upon gaining independence, President Leonid Kuchma oversaw the shady privatization of the economy that created a class of powerful oligarchs.

Since then, the oligarchs have exerted their influence in politics and business. The rampant corruption of President Yanukovych, his officials, and the oligarchs was one of the factors that led to the revolution.

Since the revolution, there has been considerable effort by the new government to clamp down on corruption. The winner of the 2014 election was candy tycoon Petro Poroshenko, nicknamed “The Chocolate King.” His party, known as the Petro Poroshenko Bloc, has the goals of ending corruption, and reforming the police amongst other things.

In February of 2015, the government created a new, streamlined tax system with the aim to stop an estimated $1 billion a year in tax fraud. The new system will be harder for corrupt companies and officials to abuse and take advantage of.

The utter lack of democracy was another spark that set off the revolution. In the 2004 presidential elections, Viktor Yanukovych was set to defeat Viktor Yushchenko. When allegations of fraud arose, the Orange Revolution led to a revote, which Viktor Yushchenko.

In 2010, Viktor Yanukovych won the presidential election, though some disputed the fairness of the election.

Since the revolution, democracy has been making strides in Ukraine. In May of 2014, Ukraine held its first post-revolution presidential election. The election was widely regarded as free and fair, and Petro Poroshenko won with 54.7% of the vote on May 25th.  The country held parliamentary elections on October 26th, 2014.

American History teacher Mr. Matt Eisele explained, “If Ukraine can provide economic stability and the development of a middle class, then a western style democracy is attainable.”

“If they do not receive the economic support they need from the west, (E.U., U.S., and the IMF),” continued Eisele, “then Russia will present the Ukraine with a viable economic package and a then a ‘democracy’ resembling Russia will take hold.”

The primary catalyst of the Euromaidan movement was President Yanukovych’s decision not to sign the Ukraine-European Union Association Agreement in 2013. Instead of signing the agreement, Yanukovych wanted to keep Russia as Ukraine’s principal ally.

After the revolution, Ukraine’s new government has moved considerably closer to the EU, both politically and economically. On March 21st, 2014, Prime Minister Arseniy Yatsenyuk signed the political part of the Association Agreement, and on June 27th, the economic part was signed by President Poroshenko. The move was called Ukraine’s most decisive step towards European Union membership by Poroshenko.

Despite some improvements, Ukraine has also suffered setbacks over the past year.

An obvious setback is the loss of Crimea. Shortly after the revolution, there were many “anti-Maidan” protests in the south and east of the country, where most of the population speaks Russian. The Russian-speaking areas of the country were the stronghold of support for the ousted Viktor Yanukovych.

There were protests in major eastern cities such as Kharkiv, Luhansk, and Donetsk, but in Crimea, the protests reached fever pitch. The Crimean peninsula, which juts into the Black Sea, is Ukraine’s southernmost region. It had the status of autonomous republic within Ukraine, but the majority of the population is ethnic Russian.

Heavily armed Russian-speaking soldiers in unmarked green uniforms started popping up and taking control of government buildings in Crimea. Soon after, Russian forces invaded the peninsula with little to no resistance. Russian formally annexed Crimea on March 21st, 2014, but few countries recognizes the annexation. Since the annexation, Russian authorities have even restricted the freedom of Crimea’s native Muslim Crimean Tatar population.

Though the annexation of Crimea was mostly bloodless, the anti-revolution sentiment caused a devastating war in the southeast. During the anti-Maidan movements in eastern Ukraine, armed protesters took control of government buildings in the Donetsk and Luhansk regions, which border Russia. The militants proclaimed the independence of the so-called “Donetsk Peoples Republic” and “Luhansk Peoples Republic,” with the intent of joining Russia.

In April, the Ukrainian government launched an “anti-terrorist operation” to take back control of the two breakaway regions. Fighting erupted, which soon escalated into a full-scale war.

On September 5th, the Minsk Protocol was signed. Even with the cease-fire in place, fighting still continued through the last months of 2014. In January of 2015, the ceasefire completely collapsed and so began a spike in casualties. So far, the insurgency has killed more than 5,000 people, many of them civilians.

In order to survive, Ukraine would have to rely of the support of the United States and the struggling European Union. Mr. Eisele said, “Ukraine’s economy is on the verge of collapse and their future survival will, unfortunately, depend on the financial support of the U.S. and the European Union. Europe’s challenge is that they need energy and trade from Russia more than they need Ukraine’s membership into the E.U.”

“This means that the IMF (International Monetary Fund) will have to fund Ukraine until an acceptable compromise, regarding Ukraine’s E.U status with Russia and Europe, can be found,” concluded Eisele.

As the Ukrainian economy continues to fail and the war drags on, many in Ukraine question the future of their vast, beloved nation. Will the Ukrainian people create their own path, or will their destiny be once again controlled by forces outside of their control? For the time being, the proud Ukrainian people still sing their anthem, which goes “Ukraine has not yet died, the glory and the freedom!”