The bigger the better?

Could the wrestling and volleyball teams benefit by moving their home matches into the place where basketball has seen so much success? 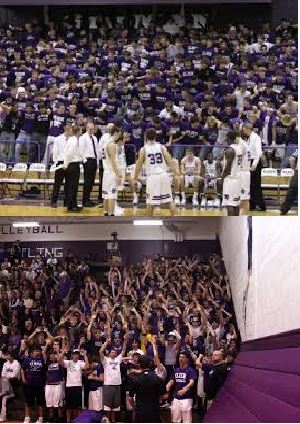 Everyone knows the electric feeling of a home basketball crowd. The passion, the intensity, and the good vibe you feel when you are in the cheering section on a Friday night is like no other. The fieldhouse definitely plays an important role in amplifying that rowdy atmosphere, with its spacious concourse and large seating capacity. Why is it, then, that Elder’s wrestling and volleyball teams aren’t taking advantage of that great building and use it for their home games and tournaments?

The difficult aspect of wrestling and basketball sharing the same playing space is obviously because the two sports both take place in the winter season, but volleyball shouldn’t have much of a problem transitioning over, since it is a sport in the spring.

There could be a possibility of the gym becoming a permanent practice room for all three of the sports. Basketball could normally practice in the fieldhouse, but switch over to the wrestling gym on days where a big GCL match is moved to the fieldhouse.

The wrestling team could purchase roll up mats to take over to the fieldhouse for matches, and continue to practice regularly in the gym like usual.

It seems as though an increased seating capacity could draw in larger crowds for both sports, and take them out a gym that seems old and outdated compared to other arenas I’ve seen used for wrestling and volleyball.

After all, the only other sport that plays its home games in the fieldhouse is the Friday morning dodgeball team, who is expected to take part in this year’s ADAA tournament in Las Vegas, as long as they can learn the 5 D’s of dodgeball.

Our athletic director and former wrestling coach Mr. Dabbelt explained that while it may not be as flashy or appealing as the field house, the gym is a perfect place for the sports of wrestling and volleyball as a spectator.

“Wrestling doesn’t have a great history in the fieldhouse. We’ve only filled one dual meet filled in history, and we hold the CIT tournament in there every four years. For state duals one year we only sold 290 tickets for a venue.”

“As a sport, wrestling is just perfect in the gym. Not just for varsity, but for the Kids Club and the junior high team that use it for their weekly practices. The match watchability is great because of the closeness of the stands to the court.”

“Volleyball is sort of the same way. A large crowd for a wrestling/volleyball match would only be about 500 people, compared to 1,000 people as a small basketball crowd.”

“It may not seem so, but the fieldhouse is used much more often than most people realize. Everyone knows about masses and other events taking place there, but that’s where the baseball team holds tryouts, where lacrosse is trying to get tryouts in some days, so you could say that it’s already in high demand without having to worry about wrestling and volleyball matches to work in.”

Head volleyball coach Mr. Tierney takes the same approach as Mr. Dabbelt in the idea that the gym is well built for the kind of sport he coaches.

“There are advantage and disadvantages to playing in a larger gym. The fieldhouse definitely has more space and a higher ceiling for serving, but the reality is it almost seems empty without a big crowd. For bigger crowds I would love to move into the fieldhouse if permitting.”

“The gym is a small, cozy place to play, and that can create intimidating home crowds. It offers a great home court advantage that can’t always be replicated in the field house. The floor is painted especially for volleyball, and I believe it is one of the nicest in the whole state. With the addition of air conditioning it’s just that much nicer to play in.”

“I believe it would almost be a disservice to our athletes if we practiced in the gym and played games in the fieldhouse. It’s always best to practice where you want to play. Plus, little things like serving space can play a major role in how you play the game.”

Senior volleyballer Kevin Siemer agrees with the idea of his team staying in the gym instead of moving for larger pastures.

“I think it would be better to stay in the volleyball gym. Although the fieldhouse is definitely bigger, the volleyball gym floor is specifically painted so we can see the out-of-bounds lines clearly. There’s isn’t much of a reason to break the tradition and switch gyms. Also, we can’t let the wrestlers and Mr. Ruffing win in saying it’s the “wrestling gym”. We all know it is the Volleyball gym.”

Maybe sometimes being bigger doesn’t always mean being better, and in the case of the wrestling and volleyball teams, the coziness and strong home court advantage the gym offers trumps the large, emptiness the fieldhouse can impress on someone.

As long as they keep performing like they have in the past, there isn’t much of a reason to mess with a good thing and break up tradition. Like the saying goes, if it ain’t broke, don’t fix it! Great job by the wrestling team this past season and good luck to volleyball team this spring!