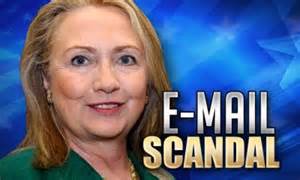 In 2008, Hillary Clinton was “destined” to be president and was thought by the media to do no wrong. Then came Senator Obama from Illinois who stole the spotlight from the front runner in the Democratic Party.

Now in 2015, Hillary Clinton is once again the front runner of the Democratic Party, but now faces glaring accusations of being incapable of securing confidential government documents. Over this past summer, the State Department was asked to release documents about the Benghazi scandal in 2011. When the State Department released no emails to or from Hillary Clinton’s government email, questions began to arise about what really happened.

It was later revealed that then-Secretary of State, Hillary Clinton used a personal email account on a personal server at her home. In normal circumstances this would not be an issue. But State Department employees are required to use GOVERNMENT email for all government activities. Although former Secretary Clinton claims she was given a choice on whether to use a personal email or government email, this was not the case. Not long after the emails were requested by the State Department, a private server company from Colorado hired by Clinton had the server wiped clean.

According to her claims, 31,830 emails were erased by Clinton. Another 30,490 were turned over to the Federal Government for inspection. Out of the first random sample, four emails classified as TOP SECRET were found, and another six emails marked as CLASSIFIED were found as well. Government documents containing such highly classified information must be handled with great care and failure to secure these documents can have severe consequences.

Some consequences in the past have varied from heavy fines (which may be a problem since she claims to be broke), termination of employment, and even some lengthy prison sentences. A former intelligence writer Matthew Aid was imprisoned for not securing one TOP SECRET classified document under former President Bill Clinton. Aid only had one document he did not secure, Hillary Clinton has been found to have not secured four in the first random search!

If Hillary Clinton used a government email, her mistake of misclassifying emails could be easily passed off to an assistant. She would have been cleared her of the mistake. However, her use of a private server offers no excuse. She failed to secure government documents, plain and simple. How can America trust a person as President of the United States who cannot secure government information?

I asked current Elder High School President Jake Rinear his thoughts on the scandal, and his opinion was more informed than many other sources.

“She wasn’t trying to hurt the United States, but the scandal shows carelessness,” Rinear said. “As the highest ranking foreign policy official in the country, she is responsible to know what is classified and what is not.”

Rinear did not believe this is a reflection of what kind of president she could be, but there is no question this will ultimately hurt her bid for the presidency. However, Clinton still holds a strong stance in the Democratic Party, and there is little sign of this changing.

“I can’t see her not getting the nomination,” Jake said. “She has too much support in the Democratic Party to lose the nomination, but there is no doubt this will affect her in the overall election.”

Like many others, Rinear cannot see the Obama administration hurting the party by pressing charges against Clinton. Hillary Clinton is backed too heavily backed by the Democratic Party to lose the nomination. The party is not going to offer support to Bernie Sanders because he has claimed to be a socialist. Biden is the only other option, but has not declared for the race.

“Biden wouldn’t be a bad pick by the Democrats,” Rinear said. He’s charismatic, popular, and his views are consistent with President Obama; but his age is his problem.”

I don’t see any way Hillary Clinton could become the President of the United States given how strong the allegations are against her. Although we the American People would love to believe the law is pure and just, we must remember that politics play a major role in everyday American life. There is no way the Obama administration will press charges against her, but I don’t see any way the American people would vote the former Secretary of State to be the president.

That being said, the presidential race is almost certain to be handed over to the Republican Party. But given how divided the party is among candidates, the election could go in any direction at this point. Only time will tell how the email scandal will play out, but it is for certain the scandal will affect the presidential election as a whole.