How well are the Panthers doing with the ladies this fall? 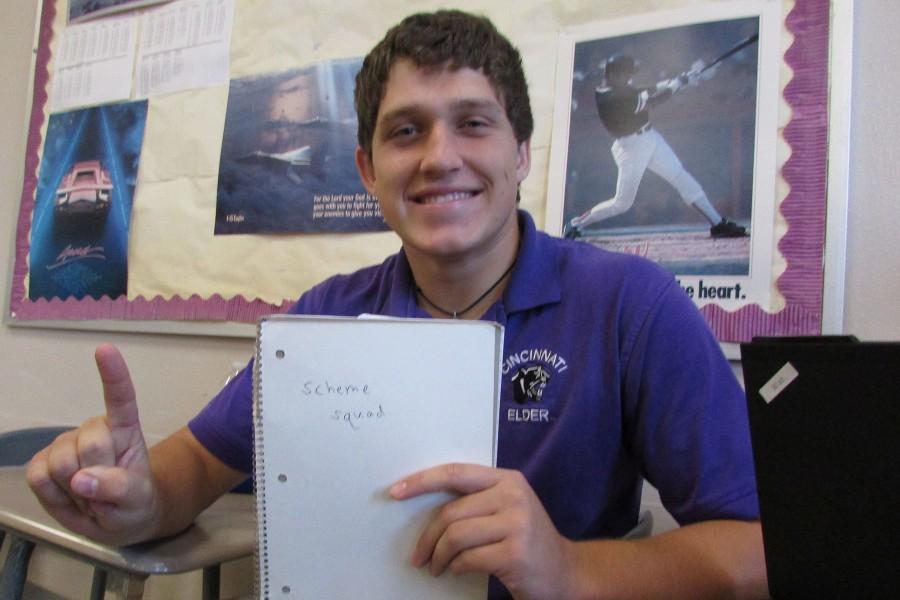 Hey there, my name is Michael Ridder and many of you may know me from my well established restaurant critique articles or Putt-Putt franchise, but today I address a new topic that is soon to take over the Elder nation.  Over the first few months of this 2015-16 school year, Elder has been home to a plethora of new and upcoming organizations.  Each club offers a variety of interests and skills, although, the newest of these clans happens to be the most “unique”.

This elite group of individuals calls their society “Scheme Squad” and is just now releasing news of the organization to the public.  For those of you who are unaware, the term “scheming” originates from the meaning, given to or involved in making secrete and underhanded plans.  Yet, some men have managed to turn this idea of “scheming” into their basis for attracting girls, and use it as the founding principle of their culture.

Luckily, I had an inside source tell me who was the head of this operation and managed to meet up with this gentleman to ask him a few questions.  I met with Jarod Frey on his way into Seton High School for “educational reasons” and he agreed to sit down for an interview.

Jarod explained that Scheme Squad is a team of highly trained scheme artists specializing in work with females.  When asked about the requirements for this new squad he replied, “First off, you must have game with the ladies, period.”  He also stressed the importance of appearance and a solid pickup line such as “Do you have a library card?  Because I’m checking you out.”

Although when it came down to it, Jarod offered me one piece of advice that benefited the most.  He explained that fanny packs are the key to getting the attention of girls.

“Fanny packs are one if not the single best invention ever created by mankind.  They are the key to my success and I never leave the house without one.”  Upon hearing this news I thanked Jarod for his time and set out to find my next target, along with a fanny pack.

Now when addressed with the topic of “ladies men”, two names usually come to mind when searching through the Elder halls; the Salamones.  Although they are not in affiliation to this new “Scheme Squad”, these two brothers are known for their skills with women and I set out to discover the king himself, Nino Salamone.

Nino, not to be confused with Nemo, was in his usual dwelling-the weight room-when I approached him.  When I explained the topic of women, Nino stated that he was not surprised that I came to him and not Rocco.  He described to me that, “When it comes to girls, some people say it’s a sprint not a marathon.  Well I sprint marathons, simple as that.”  Realizing just how serious he was about the topic, I dove right into the interview.

Nino believes that he is truly a better “ladies man” than his older brother Rocco, and states that pickup lines are not needed because once he starts talking, its over from there.  Yet, Nino told me that one key factor to his success with the ladies is his newly pierced ears, allowing him to get the attention of the girls right of the bat.   Nino ended his interview stating that he is indeed bigger than Rocco, despite contrary debate, and I allowed him to get back to work.

Satisfied with my feedback and new insight on the ways of women, I headed home.  Although, reaching my car I received an urgent phone call from a distressed Rocco Salamone.  Once he heard that I had interviewed his younger brother instead of him, he demanded that he should have the opportunity to rebuttal his answers.  Overall, he contradicted Nino stating that he was a better ladies’ man and that he was indeed, “bigger than my LITTLE brother!”

Even though the two disagreed about many of the responses, they both look to a man named Samurai Middendorf as a role model in relating to girls.

These three Panthers offer a great amount of knowledge on attracting the ladies and I look forward to what the rest of the year brings for these men and their endeavors.

(*NOTE: None of these men have girlfriends and I am not responsible for the failed attempts you may have with women if taken their advice.*)