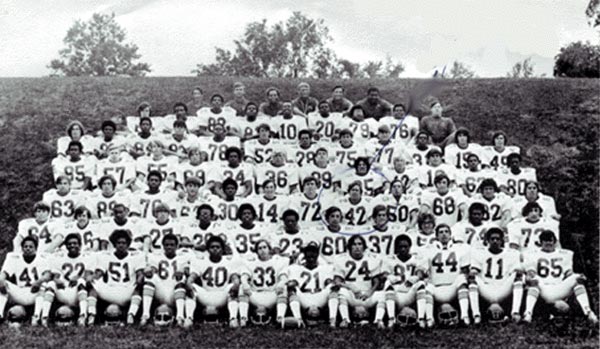 Hollywood and football are two popular and powerful American traditions. The film industry is worth billions of dollars and football practically owns Friday through Sunday in the fall. When these two meet, masterpieces of entertainment result. In some cases, football movies try to inspire us or teach valuable lessons, but in other cases, comedy is used in the mix. But regardless of what route the movie takes, a vast majority of us are left satisfied. I asked junior wide receiver Ross Hambelton what his favorite football movie is.

“Definitely We are Marshall,” said Ross. “It teaches us to overcome adversity and how to adapt to life’s challenges.”

10. Division III: Football’s Finest: Anyone who has seen this film knows that film production of it is atrocious, but it is extremely hilarious. Unorthodox Coach Rick Vice (Andy Dick) is selected to transform a small division III football team into winners. He has only one season to achieve a winning a record or the program will be terminated. When the athletic director adds himself to the coaching staff after an 0-4, the team begins winning and they reach their goal of a winning record.

9. Longest Yard: In this comedy Paul Crewe (Adam Sandler), former NFL star, is arrested for multiple charges and is asked by the warden to get a team together of convicts to play against the harsh and cruel security guards of the prison. While Paul struggles to find inmates to play in the beginning, he ends up with some amazing athletes, such as running back Earl Megget (Nelly) and wide receiver Deacon Moss (Michael Irvin). While Crewe’s team (“Mean Machine”) is tied with the guards at halftime, the corrupt Warden convinces Crewe to throw the game or he’ll be in prison for decades longer. Crewe eventually makes the choice to beat the guards and pay the consequences.

Best Quote: “He broke-ded my nose.”

(True story) A mentally disabled black man, James “Radio” Kennedy (Cuba Gooding, Jr.), is befriended by a local High School football Coach, (Ed Harris). While the team struggles and fails to make the playoffs, Coach Jones is on the hot seat for paying more attention to Radio than to the team. He realizes that there is much more to life than football, and eventually decides to retire, but his legacy lived on with the compassion that he taught his community.

Best Quote: “It’s never a mistake to care for someone.”

(True story) During the mid-60s, Brian Piccolo (James Caan) and Gayle Sayers (Billy Dee Williams) join the Chicago Bears as rookie running backs. As the two team mates become the first white and black players to room together, their friendship grows into something very special. While the two go through up and downs, such as Gale’s injury, Brian eventually is diagnosed with cancer. As they continue to grow together through Brian’s illness, Gale continues to play on. Sadly, Brian ends up passing away, but Gale is left as a changed man.

Best Quote: “Brian Piccolo died of cancer at the age of 26. He left a wife and three daughters. He also left a great many loving friends who miss and think of him often. But when they think of him, it’s not how he died that they remember – but how he lived. How he did live!”

(True story) In 1970, Marshall University’s football team is on a plane flight home, but it tragically crashes and leads to the death of the entire team. New coach Jack Lengyel (Matthew McConaughey) is expected to bring the Marshall football program back to its former place and help alleviate an aching Huntington, West Virginia. As the team prepares for one of its games, Coach Lengyel gives the speech of a lifetime and leads the Thundering Herd to a victory.

The only that is as big as G.C.L. football is Texas football. When the star running back, Boobie Miles (Derek Luke), is seriously injured during the first game of the season, all hope is out the door, and the town’s social problems begin to come alive. It is left to the inspirational new coach Gary Gaines (Billy Bob Thornton) to not only get his team to win, but to teach them dignity and honor. As they make it all the way to the state finals and end up losing on the one yard line, the team learns that there is much more to life than winning.

Best Quote: “Perfection is being able to look your friends in the eye and know you did everything you could not to let them down.”

Years ago, Coach D’Amato’s (Al Pacino) Miami Sharks was the best team in the country, but now with many aging players, unsatisfied fans, a struggling personal life, and the president of the team (Cameron Diaz) breathing down his neck, D’Amato has to save his team from a losing season. With one of the greatest pre-game speeches in film history, D’Amato comes up victorious as he leads his team to victory.

Best Quote: “You’ve got to look at the guy next to you, look into his eyes. Now I think your going to see a guy who will go that inch with you. You’re gonna see a guy who will sacrifice himself for this team, because he knows when it comes down to it you’re gonna do the same for him. That’s a team, gentlemen, and either, we heal, now, as a team, or we will die as individuals.”

(True story) As the Philadelphia Eagles hold open tryouts in 1976, lifelong football fan Vince Papele (Mark Wahlberg) makes a desperate stab to make the team. As he is invited to training camp after a great tryout, Vince begins to realize that his dreams are coming true. While some of the players, and even one of the janitors, thinks that Papale’s emergence is a joke, he receives help along the way from  some of the other players. Papele eventually makes the team as a special teams player, and ends up recovering a fumble and scoring a touchdown.

(True story) One of the greatest underdog stories of all time, Rudy Ruettiger (Sean Astin) is from a small town and comes from a middle-class family in Indiana. Rudy wants nothing more than to play football for the University of Notre Dame, but he is a sub-par student and has no athletic ability. After graduation and saving up his money, Rudy decides to take off for South Bend after the accidental death of his best friend Pete (Christopher Reed). Rudy starts off attending the community college of Holy Cross, and ends by dressing in his last game for the Irish and coming up with the game ending sack.

Best Quote: “In this life, you don’t have to prove nothin’ to nobody but yourself.”

(True story) Racism is something that has been around the U.S. for centuries, but this classic teaches that it is not about the color of a person’s skin, but the content of their character. In 1971, T.C. Williams High School is forced to bring white and black students together in the racially torn city of Alexandria. Herman Boone (Denzel Washington) steps onto the scene as the new Coach after taking over for Bill Yost (Will Patton) and is faced with the many racists of the town. Boone eventually overcomes all of the challenges he is faced and brings his team and the whole state of Virginia together as T.C. Williams wins the state title.

Best Quote: “Alice, are you blind? Don’t you see the family resemblance? That’s my brother.”