A letter to the seniors 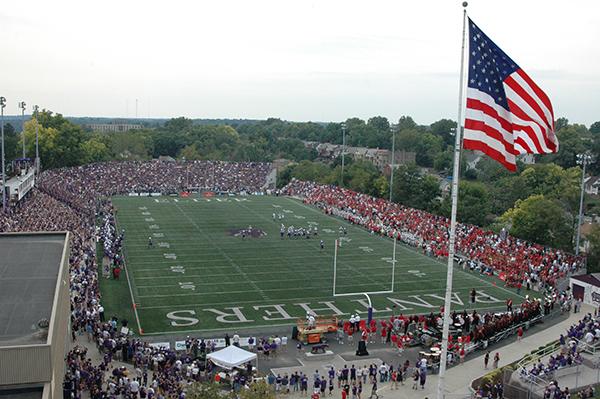 The pits hosts Colerain and ESPN in 2009 game.

I don’t know about you guys, but each day here seems to be more and more precious as they go by. The morning walks from the Schaeper Center lot, the class Masses, the pep rallies, the conversations at the lunch table, they all seem more special than when we were underclassmen.

The big event that really hit me hard was the ending of the football season. A special privilege, whether it be playing out on the field or watching the games, has come to an end. Although it has ended, we’ll always have the memories. We’ll never forget those passionate GCL games, the plays that made the Pit erupt, or even taking down the #1 team in the nation.

As I was riding home from the game, I thought to myself, “Wow, senior year is flying by faster than I ever would’ve thought it could.” I’m sure many of you guys have the same thoughts. Although our time here is dwindling away fasting than we can control, we still have time to control the rest of our senior year here at Elder.

I hope we’re all able to leave here with no regrets. If you’re debating whether or not to do something or get involved with something here, just do it. Do all of the things that you’ll never be able to do again! Personally, I’ve never watched an Elder Baseball game, and that’s something I’ll absolutely do this spring. Bottom line is this: do everything you can while you are able. If there’s a classmate you’ve never talked to before, talk to him. If you’ve never enjoyed a pancake breakfast before, go to one. If there’s a dance you’ve never been to before, go to it (Unless it’s the Elder rave).

We’re all going our separate ways next year, but until then, let’s do as much as we can for the school that has given us all so much. Elder has helped us all form our identities, our friendships, and our goals. As I’ve learned during my time here, what you put into your time here at Elder is what you get out of it. So many quotes apply to our time left here at Elder, one of the major ones being “What I had, I gave. What I saved, I lost.”

I’ll end with this. Many of us all watched Dead Poets Society last year in Mr. Ploehs’ class or have seen the movie out of class before. A major quote from that movie comes from John Keating when he says, “seize the day boys, make your lives extraordinary.” As we get closer to graduation day-by-day, let’s take that quote to heart and make each of our final months here extraordinary.