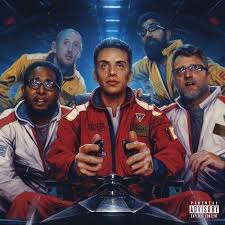 Logic, a Maryland rapper aka young Sinatra is back with another full length commercial album, just a year after his commercial debut Under Pressure. Through a series of mixtapes and his previous album, Logic has earned the respect to be one of the more well-known rappers out right now.

The announcement of his second album, The Incredible True Story, generated questions about how Logic could follow something as intricate and personal as Under Pressure. Logic answered that question by taking his listeners to outer space.

On The Incredible True Story, Logic takes the role as a screenwriter and director, claiming to have written an actual script for the album. The album is set 100 years in the future, as the two narrators, Thomas and Kai, search for a planet named Paradise following Earth’s destruction. So what do these two narrators do on a trip looking for a new planet to inhabit, they listen to Logic’s album, claiming this to be the album that changed everything.

The album starts off with a really scuttle slow song called “Contact” which at the end of it has the narrators give you some perspective for the album. With the next song “Fade Away” which is one of my favorite songs on the album, Logic reflects on death’s inevitability, everyone dies eventually, so strive to create something that lives on after you. After “Fade Away” comes the song “Upgrade” which really doesn’t do anything special for me. Not a bad song just doesn’t do anything special for me. Then the album brings you to your first scene called “White People” which is just the narrators talking nothing too special.

The next song which was Logic’s second single to the album “Like Whoa” I really enjoy a lot. On this song the real thing that drags you into it is the instrumentals and the beats. Not to take anything from Logic’s rapping on the track, the beats are just what caught my attention.

Despite being set in the future, the album takes time to dip into the past. On “Young Jesus”, Logic and guest Big Lenbo trade verses over producer 6ix’s recreation of ’90s hip-hop. This song was Logic’s first single for the album and is easily one of my favorite songs from the album. I love the beats and the rapping in the song, for example on the second and third verses, where Logic hands the song off to Big Lenbo like they’re performing live and sharing a mic.

On the song “Intermission” it doesn’t really do much for me but I do like the transition from the song “Young Jesus.” This beat is a lot softer than “Young Jesus,” but it’s a nice change of pace. This was the first point in the album where I realized it is finally starting to flow together. Next, and probably my favorite song on the album, is “I am the Greatest.” There is not much to explain really about this song other than it is Logic saying that he is the greatest. I think the main thing that draws me into this song is the production and the beats. Logic then gives another scene called “The Cube” which talks about how girls love the Rubix cube.

“Lord Willin” has the same modern feel as “I am the Greatest” but is different in a way. In this song Logic seems to have a better flow but there is not much on the track that stands out to me personally. Going onto “City of Stars” this song sounds a lot like Kanye West’s “Flashing Lights.” Logic is pretty well known for being compared to a lot of different rappers, and with this song I can see why. Near the end of the song Logic becomes more aggressive as he unloads his frustrations with hip-hop, including the fixation on the biracial MC’s appearance. “I didn’t talk about my race on the whole first album/ But black versus white bulls*** was still the outcome.” He then takes aim at critics, amateur and professional, who chide Drake for harping on “money and girls” yet praise 2Pac for doing the same. This is when Logic is at his best when he is really rapping about what is on his mind.

The album then continues to the song “Stainless” which again has another great beat. Another one of my favorite songs on the album by Logic, and the production on it is really just great. This song is one of the reasons Logic is known for his lyrics. Onto another scene in the album called “Babel” it really brings you back to the space feel and not the rap feel. The song “Paradise” Logic sharper flow as opposed to the smooth one. This song gives me more of an Under Pressure feel which I definitely like.

On the song “Never Been” it has a real colorful type of feel to it. I know I’ve said it multiple times but even with this song the production is fantastic. Logic’s heart is showing through here, but this effort feels like it’s missing a little something. Coming near the end of the album Logic comes through with one of the top tracks of the album “Run it.” The production on this song tops the others which was beyond impressive. In this record Logic mentions that his last album was a “classic” which is always a dangerous thing for rappers to say, but can you disagree?

The last scene on the album called “Lucidity” really just confused me. I didn’t really get anything out of this scene and I’m not sure what to take from it. The album ends with a six minute song called “The Incredible True Story.” The instrumentals for this song are very interesting to say the least. Logic always fills every part of the song but there’s some pauses and breaks in it. Decent song just not the biggest fan of the ending/length.

Michael Townsley a senior here at Elder who has been a fan of Logic since the beginning gave me some insight on the album. “I really enjoyed the album, but I would be lying if I told you I liked it more than Under Pressure,” said Townsley.

Overall, I thought this was a really interesting album. I liked how Logic tried to make a film/album. The production was awesome, but I didn’t find myself liking all the songs. I think Logic is very talented, and I feel like he could’ve done so much more with this album. If I had to rate it I would give it a 6.5 to a light 7. Don’t get me wrong it was a good album I just thought it could have been so much better.