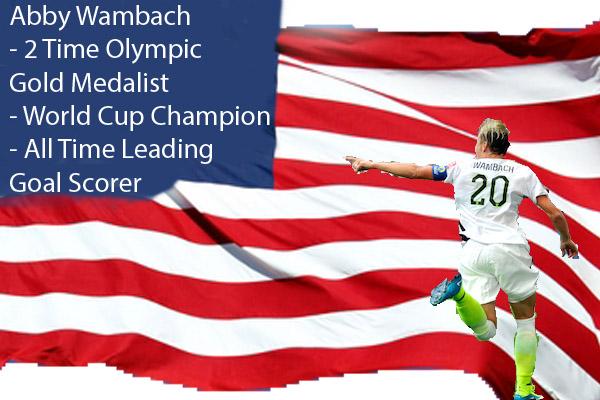 LeBron James, Peyton Manning and Landon Donovan have one thing in common, they have changed their respective sports forever. Another player that has changed the game of women’s soccer forever is Abby Wambach.

Wambach’s last game was December 16th when the US played China in New Orleans. Although the US lost the game 1-0 (ending a 104 game winning streak on American soil) the fans were really there to see Abby’s farewell. She was the starting captain and was subbed out in the 72nd minute. Her whole team gave her a hug and showed their love for their teammate. Wambach then took off her cleats and gave her captain’s band to Carli Lloyd.

Abby Wambach is one of the greatest female athletes in history. First of all she has scored 184 career international goals, which is the most by any player ever, male or female. Plenty of these have been headers which have become her signature scoring method.

She is a leader both on and off the field for the US. She pumps the team up and loves to get the fans into the game. Elder senior soccer star Adam Deuber had this to say about Wambach’s leadership in America, “I think she has done a great job of raising the sport of soccer in America.” She has definitely played a prominent role in bringing women’s soccer to the big stage for most Americans.

One of the most memorable moments of the star’s career was in the 2011 World Cup. Wambach put a header in the back of the net in the 122nd minute against Brazil in the semifinal game to send the game to penalty kicks, which they won. This was the latest goal ever scored in a match and won the ESPY for Play of the Year. Adam called it “one of the most iconic moments in US soccer history.” To relive the memorable moment, click here.

Abby Wambach is not only a hero, but also an American legend. Like Babe Ruth said in The Sandlot, “Heroes get remembered but legends never die.” This is definitely going to be true for Abby as she will always be a presence in soccer.  She completely changed the way that people view the sport.