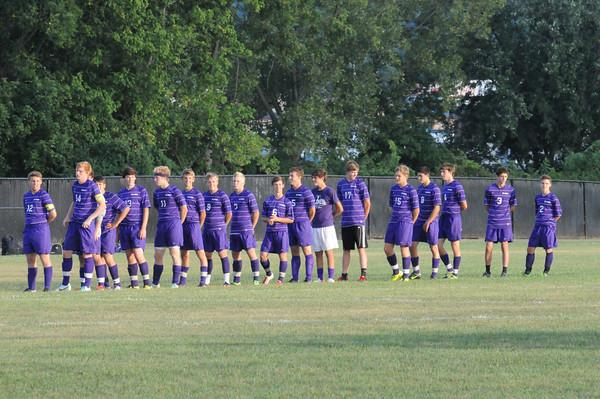 Elder soccer team prior to their game versus Fairfield.

The 2013 Elder soccer team has a lot of returning talent. After a great season last year came to a disappointing end in the tournament, many of this year’s seniors want to make sure they go further.

Some of the returning players are seniors Brian Poston, Sam Maciejewski, Kory Hammann, Nick Lamping, Nathan Herdeman, Noah Burbrink, and Josh Enginger. They are motivated to make a deeper run in the tournament then they did last year. All seven of these seniors were in the starting lineup against Oak Hills this past Thursday. The other starters were sophomores Stephan Deutenberg, Lenny Belew, and Joey Sabato. This 2013 Elder soccer team has a lot of talent and a really good chance to make a run in the tournament.

The team is currently 4-2, and are coming off a big win against St. X last Saturday. The 2 -1 victory over a GCL rival is a great bounce back after the disappointing loss to Oak Hills. The game against Oak Hills each year is one of the players’ favorite. They love the support they get from the cheering section. Many of the players said it gets them psyched to see their fellow Panthers cheering them on. The players are also fueled by the rivalry between these two schools.

Elder and Oak Hills have always had a little rivalry between them, especially after what happened last season with senior Kory Hammon. Kory was forced to sit out after he transferred from Oak Hills to Elder. There was a lot of controversy, but the Panthers put it behind them and concentrated on beating Oak Hills again. Some Oak Hills players were even talking smack on Twitter. As an Elder soccer player, it was important to just ignore it and move on.

The game was a tough one. Elder struggled, giving up four goals to Oak Hills. In the end, they ended up losing 4-2. The Panthers fought hard, but it wasn’t enough in the end. Senior goalkeeper Brian Poston was not cleared to play because of a concussion. When asked about having to sit out, Poston said, “It was horrible. I was literally going insane.” Poston is a very motivated person and it wasn’t a surprise to see he was not happy about sitting out. Giving up only six goals in five games, Poston is off to a great start.

Elder soccer looks to bounce back and continue to do what they need to do. They have great senior leadership out there and it will show throughout the season.