Elder wiffleball back on spring grind 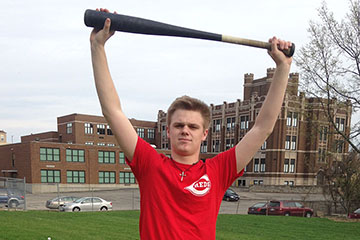 It is now April and the Wiffleball Club has come out of their winter hibernation and are ready to get back on the field for the spring session. The Wiffleball Club was started this fall by senior Jacob Geiser who was all in at the start of the club by making T-shirts for the club which never seemed to arrive for the members. After a few successful meetings of the club they were forced out of the gym by the volleyball team.

After the winter they have decided to take the club outside to satisfy the spring fever that everyone has. The first meeting of the club was March 30 and the turnout was not where the commissioner wanted it to be. Only four people showed up for the first meeting and homerun derby was played instead of a game. Jacob Geiser reigned supreme in the slugfest despite his devastating injury that has left him in a boot.

One of the people that showed up was Liam Geiser, the lone freshman to show, he said that it was disappointing that no one really came. “I was looking forward to hitting some dingers off my brother. I wanted to get prepared for my run for the trophy at the Elderfest tournament but couldn’t do that because of the low turnout.”

The commissioner of the club thinks that there will be a better turnout as the weeks go on and baseball season gets into full swing. That will be decided by the students who choose to attend the games every Wednesday afternoon after school.

One reason that Jacob thought the first week wasn’t so good was “we held it in the evening at 5:30 the first week, we are switching the games to right after school and I think that will increase student participation.”

The main reason for starting the club for Geiser was to help him repeat his sophomore performance and get to the top of the Elderfest Wiffleball Tournament instead of losing in the finals like last year. “There was no other feeling in the world like winning the 2014 Elder World Series of Wiffleball Championship.”

For “Geezer” to get his wish he’ll have to go work some of the magic that got him elected as secretary of Elder High School and get enough people for two squads to take to the diamond and work on their game. The future of Elder Wiffleball is shaky, it will be interesting to see what will come out of this year.