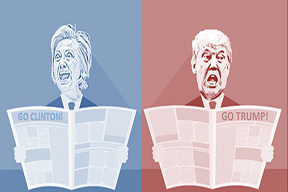 Newspapers have been supporting candidates for decades// Edited by Joe Reiter

Next Tuesday, November 8th, it will finally be over. The bitter Presidential campaign is wearing down – the debates are done, the shots have been taken, and campaign fatigue is plaguing the nation.

Undeniably, both candidates have their blemishes, or should I say scars? At this point, another accusation is no more than a drop in the ocean.

We’ve heard it all, well at least everything besides the actual issues, and it is time to move towards a different election based problem that does not center around Hillary or Donald.

Newspapers: bringing us the unbiased news one swift stroke of the pen at a time. Or are they? The papers have been endorsing presidential candidates for over one hundred years. Back in 1860, for instance, the New York Times supported that one politician from Illinois.

All these years later, newspapers are still supporting candidates, and it is time they stop.

I am not saying that the expression of opinion is wrong or that newspapers should have to waive their first amendment right. However, I cannot help but find it inappropriate that a news outlet completely backs one nominee. Here is a list of the endorsements this year.

Sure, for one writer to do an opinion piece on why one candidate is either fit or unfit for office is something I fully support. This works especially well when someone else in the same news outlet supports the opposing candidate. Taking a slant at an issue, problem, or idea is a what makes journalism interesting because no topic is just black and white.

Papers are not meant to push political agendas, and they definitely should not do so during the presidential elections.

Unless that news outlets is literally founded on the idea of being right-winged or left-winged, such as Breitbart and Mother Jones. A truly professional news outlet does not pick sides and favorites. Instead, it chooses to express different ideas and opinions to the fullest and, ultimately, letting the public think for themselves.

While I am on this tirade against the media, I’ll use this time to talk discuss something that has been bothering me for this whole election. No Donald is not a neo-Nazi sent here to bring evil, and no Hillary is not the founder of ISIS. Instead, they are just two genuinely bad candidates. Hillary’s career has been marred with corruption, and Donald’s has lived the notorious life of an “I can do whatever I want“  billionaire tycoon.

Two bad people and one sacred position – it is a shame. Ironically, they both still have the tenacity to call out the other for some disgraceful thing the other said or did. And when the garbage (Hillary and Donald)  throw garbage all we get is, well, garbage.

So here is my challenge to you. Get off Twitter, get off Wikileaks, and get away from the biased propaganda. Take a stab at the issues, see what these candidates actually want to do if elected (you’d be surprised; there is a lot more besides to that build that wall or not to build that wall), and then make your decision.

Here at The Quill, you do not have to worry about us endorsing Donald or Hillary. We’ll give you the news how it is. Maybe we’ll throw a strong opinion out there every once and awhile, but it’s not for our own agenda. Instead, we are here to write and express, and it is up to you to figure out the rest.