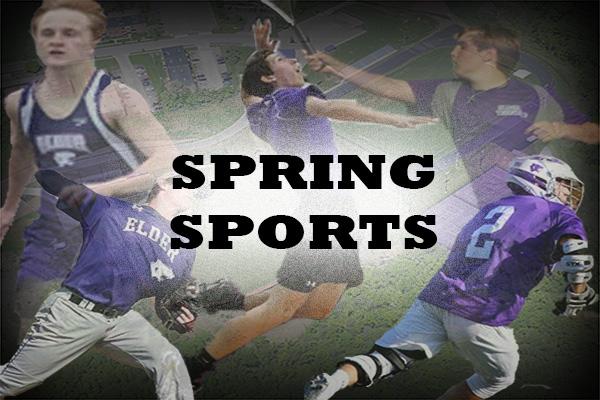 The first official games, matches, and meets of the spring sports season begin in March.

Many of the spring’s teams will look entirely new compared to last year; guys who are not used to the lime light will have to step up. Still, this senior class, like many before it, is ripe with stars who are plenty ready for the pressure.

With the help of our upperclassmen  from the volleyball, tennis, track and field, lacrosse, and baseball teams,  I got the latest news and outlooks on the this season’s athletics.

Brandon “Bcat” Cole is one of the  team’s captains along with Danny Hurley and Elliot Reiring.

The tennis team is one of the many sports teams that have had to replace many guys this 2016-2017 school year, but he is excited for all the new faces and is looking forward to “see what they can do.” With the new players, they also have a new coach, Mr. Mark Lukas, who previously coached at Notre Dame Academy.  They are many mysteries for tennis team this year, but Cole is looking forward to the experience.

Per usual, they are looking to win the GCL. Saint Xavier will be one of the top teams in the state, so the GCL title becomes even more sacred for the tennis team.

Senior Josh Powell has been one of Elder’s baseball phenoms since the day he entered the program, and he will be hitting more homers at Tiffin University next year.

Powell is confident in the team’s future especially with the juniors winning GCL last season. Obviously, he wants to bring back a GCL championship to Vincent and Regina.

As many know, baseball is a gruelingly long season with the amount of games and the time it takes to play them. Powell said that “the biggest challenge will be staying focused on our goals and just grinding through the season.”

Since the season has not officially started, the baseball team has yet to name captains. However, Powell still knows the team is full of leaders.

“Adam Keller (pitcher) has been working very hard this off-season, and we have Kyle Service (pitcher), an NKU commit, whom we expect big things out of. A couple standout juniors would be Justin Donovan, Brandon Meters, Lenny, and Eli Guck,” Powell added.

Time flies is a cliche almost to real for most Elder students, and Powell wants to “go out with a bang,” and he wants to make the last year as fun as possible. He still remembers the baseball camps he went to as an incoming freshman; he wants to make these final memories the best.

While Elder baseball had a down year in 2016, but Powell, other senior leaders, and the rising stars of the junior class will have a legitimate shot at finishing atop the league – something last done in 2014.

One of the team’s senior leaders is Ross Mullen who has been on varsity since the dawn of his sophomore season.

Like many of Elder’s teams this year, the lacrosse squad will be young. However, Mullen told me the plethora of youth does not mean their will be a lack of experience. Last year, nearly all of the team’s middle fielders were sophomores, so they will be used to pressure as they enter their third year of lacrosse.

The lax team has a history of  flying under the radar with Saint Xavier having one of the best programs in the state; Mullen and the squad will be able to prove the team’s worth with wins over a team like St. X: “I am looking forward to see how well we compete with schools who look down on us as an average team.”

Along the same lines, he wants Elder lacrosse to make a statement in his final season saying the goal is “to make a playoff run which we have never really done before, and I know we have the talent to do that.”

The team took a major blow when Jack Mazza went down with an ankle injury this football season that will have him sidelined again this spring. Still, the team has a strong supporting cast with Luke Newell (senior) having one of the “best shots” Mullen has ever seen, midfielder Nick Hilsinger (junior) being a varsity member since his freshman year, midfielder Preston Winner (sophomore) who was the only freshman on varsity last year, and an aggressive  defenseman, Corbin Scholtes, who “handles the ball well.”

The lacrosse team has a lot to prove, and the expectations are high after a years worth of around the clock training.

Track and field is a team and an individual sport with over a dozen events; it can be broken down into a few different categories: distance, sprinting, field, and throwing events.

Kelton Ashe, a high jumper, represents the sprinting and field events. The track and field team is yet another Elder sport that will have a lot of guys looking to make the varsity squad for the first time. Ashe is one of the teams returning stars, and this will be his seventh year running and jumping for track and field.

Having so many new members Ashe said that, “one of our biggest challenges is a lack of experience. We have a lot of underclassmen and several first year juniors. Learning to compete as a team could be difficult.”

Other seniors like Nick Heyl, Roman Lee, Adam Gerhardt, Tim Tieman, and Jake Mulligan will have to step up and compete for the captains spots once the season kicks in. Juniors Carlos Rios, Adam Klasner, and freshman JV Richardson help make up the team’s younger talent.

On the longer side of things, we have the distance events.

Distance captain Adam Noeth is confident in his guys this season: “We have a lot of depth this season with many guys chasing varsity spots that opened up from last year.”

The wear and tear of distance running can take a toll, and Noeth mentioned that injuries could be the biggest problem for them with people like captain Andrew Schenkel being out with a knee injury for the time being.

The outstanding distance runners will be lead by one of the captains, Ryan Schenkel, who will be looking to make Elder history by running under 10 minutes in the two mile. The junior class will play a large roll this season with guys like Nick Merk, Eric Lengen, Eddie Cummings, and Jack Faecher all having varsity experience in cross country.

The depth and experience is there for the distance squad.

Now we have the throwing events.

The weight-men will be lead by junior thrower Luke Mastruserio who is looking to leave his mark on Elder with some all-time best results in his events.

With no returning seniors, they might not have a set captain this year, so returning throwers, like Mastruserio, will have to fill the void: “Nate Hill, Adam Siry, a new thrower Spencer Bono” are looking to be the top throwers.

The loss of junior thrower turned distance guy, Joe Huschart, and other key weight-men provide some holes that will be filled this spring.

What they lack in seniority they make up for with skill, and Mastruserio thinks “a few guys could make it to regionals” if they put in the work.

The Panthers finished first in GCL in 2014 and second in both 2015 and 2016. Although this is a very young track and field team, a GCL title is not out of the picture with LaSalle being the current favorite.

Obviously, the Panthers lost some quality players in last year’s senior class, but volleyball has reloaded as well as any sport could. The 2017 volleyball squad will have a legitimate chance to repeat as state champs.

The team has a great  core of senior leadership and experience with seniors Max Hoffmeyer, Graham Koenig, Mark Klusman, Jack Knolle, Alex Witte and Liam Conway (who I got to catch up).

“We have been teammates our whole lives and have a tight knit group of real friends, and this season is just another opportunity to do what we love,” said Conway on his fellow seniors.

A state title will always be on the minds of this year’s volleyball team, but “no win from last year will be on the record for this season.” The volleyball guys have a clean slate and a new legacy to build this year. Surprisingly, a state title is a secondary priority for Conway.

For him, the most important part of the season is to make it “unforgettably positive win or lose.”

This year Conway wants to complete the dream he has had since he was young: “What I’m looking forward to most is simply living the dream I’ve held since I was a kid. Going to Elder and watching Elder Varsity play in the Volleyball/Wrestling gym was like looking up at an Olympus. All these guys were so tall and there’s something so personal about Elder volleyball. I knew the players by name, and they would talk to me and my friends and family.”

GCL, district, regional, and state titles will be on the line for most of our spring sports. For the seniors, this will be their final chance to compete in the purple and white.

Conway sums up the feeling all of our senior spring athletes have as they look to go out with a bang.

“My senior year (of Elder Volleyball) is finally here, and I can honestly say I can’t believe it’s happening, and I’m just excited to be here and soak up every second,” Conway added.

Let’s get after it this season. Altiora!