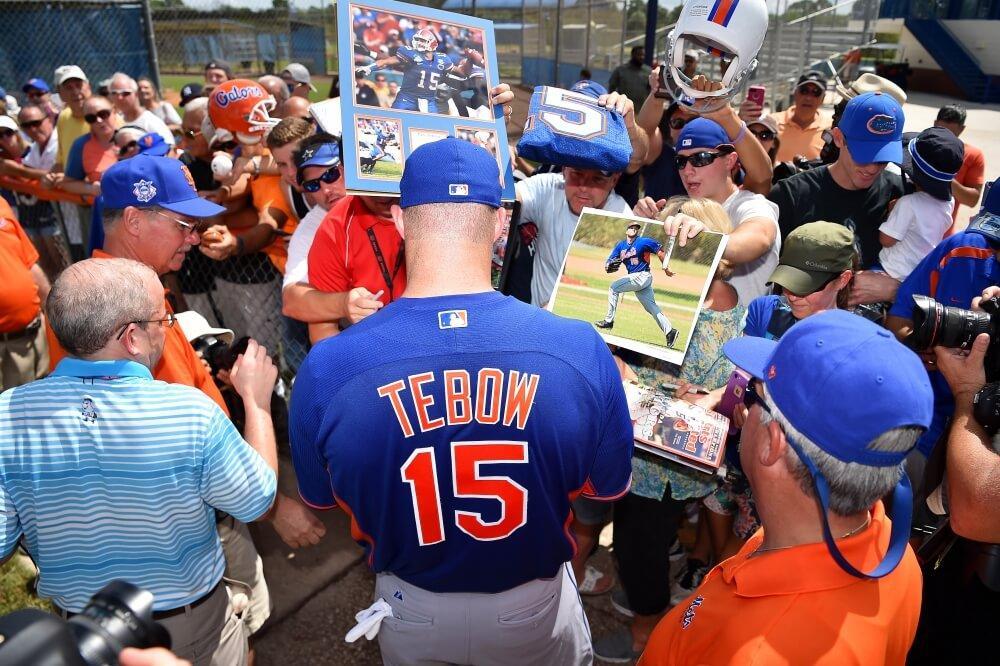 After his NFL career ended, the former quarterback is trying America's past time.

With the hot California sun beating down on him, Tim Tebow was crushing baseballs over the fence at Dedeaux Field, home to the Trojans of the University of Southern California. Swing-after-swing, his bulging muscles flexed and unloaded on the baseballs being fed to him.  In front of scouts from 28 different Major League teams, Tebow was attempting to start something new: a baseball career.

Tebow announced late last summer than he was going to try his hand at playing professional baseball. Even though he hadn’t played baseball since his junior year of high school, the 29-year-old impressed Major League scouts during a tryout organized by Tebow and his agent. He showed some potential, especially with the bat, as he displayed above-average power.

In the weeks after the tryout, Tebow was signed by the New York Mets and participated in the Mets’ Instructional League and the Arizona Fall League. Many people are questioning whether or not he can make it to the Major Leagues.

Before I give my take, let me preface this by saying a few things. I have been a Tim Tebow fan for a long time. The first football game I can remember watching was the 2007 BCS National Championship Game, where Tebow’s Florida Gators thrashed the Ohio State Buckeyes. Tebow wasn’t even the starting quarterback, but he still managed to make a huge impact on the game. He scored two touchdowns (one passing, one rushing) en route to a 41-14 Florida victory.

From that game forward, I was hooked. There was just something about Tebow that drew me and millions of others towards him. Maybe it was the outward showing of his religious beliefs. Tebow wrote “John 3:16” on his eye black for the 2009 BCS National Championship and the bible verse became the most-searched term over the next 24 hours. Maybe it was the heart and determination he played with. He has always possessed unbridled drive and love of competition.

This was on full display after a surprising loss to Ole Miss early on in the 2008 season. Tebow got emotional after the game and promised to the Gator faithful that he would work and play harder than any player ever has for the rest of the season. Or maybe it actually was the talent. Even though his NFL career flamed out, he is one of the best and most revered players to ever grace a college football field. He won the 2007 Heisman Trophy Award and was also a Heisman finalist in 2008 and 2009.

I owned a Tebow jersey that I still wear with pride, even though it can be difficult to squeeze into a jersey I received over five years ago. I read his first book, although I’m still waiting to read his latest works.

I had been on his bandwagon for years before the infamous “Tebowmania” run with the Denver Broncos in 2011, when Tebow took over a 1-5 team and took them to the playoffs, while leading several fourth quarter comeback victories. The list goes on and on. It’s safe to say that this article is coming from a certified Tebow fan.

Secondly, I hope he succeeds. More than a few naysayers are currently launching vitriol and laughter in Tebow’s direction. They feel that there is no way he can carve out a career in professional baseball for himself. Many wonder why he wouldn’t just stick to his cushy ESPN analyst job. I do hope he succeeds though. It would be a classic American redemption tale, a story tailor-made for Hollywood.

Realistically, Tebow’s chances of making it to the MLB are limited at best. He’s already 29-years-old and hadn’t played organized baseball in 12 years prior to signing with the Mets. Most MLB players are in the prime of their careers at age 29, but Tebow’s career is just getting started. He’s just so far behind all other players after missing 12 years of at-bats.

He does have some decent skills to build upon. A behemoth of a man, the lefty is 6 foot 3, weighs 255, and looks as though he was chiseled out of stone. He easily has one of the better power builds in baseball today. Tebow is also extremely athletic and showed decent speed as a scrambling quarterback.

As he has shown in batting practice, Tebow can hit a baseball a long way. He generates a lot of power, especially to the opposite field, with a slight uppercut swing. One word I would use to describe his swing is violent. He swings very hard and when he makes solid contact, the ball comes screaming off his bat.

The problems with his hitting at the current time are pitch recognition and swinging over the top of the ball. Pitch recognition is going to be an issue for him because of the 12-year layoff from playing baseball. This should improve, however, as he gets more in-game at-bats.

Topping the ball is his other problem. He hits a lot of ground balls. Tebow exemplified this during his spring training debut, when he grounded into a double play on the only ball he hit in fair territory.

Fielding is a bit of a work in progress for the former Heisman Trophy winner. He is slated to be a corner outfielder. Tebow’s ball-tracking needs to be improved, but that will come with repetition. His footwork is also a little clunky, as he seems somewhat hesitant to attack balls that look like they will land in front of him.

As you would expect from a former NFL quarterback, his arm strength is very good, but his accuracy can be a little suspect. This could be due to his footwork throwing his mechanics off.

The good and the bad

There was some good, but a lot of bad during Tim’s short stints in the Mets’ Instructional League and the Arizona Fall League.

In the Instructional League, Tebow hit an opposite field home run in his first professional at-bat. He did miss some games though due to his broadcasting obligations with ESPN.

Tebow then got off to a slow start in the Arizona Fall League and finished with a .194 batting average and no home runs. He did hit .281 in his last 11 games, which definitely shows improvement, and possibly fosters up some hope.

The concerning stat is his lack of home runs. In batting practice, he has shown the raw power that sends scouts drooling. This power has yet to transfer over to actual in-game at-bats. His power is what gives him the chance to make it to the big leagues.

If he can’t start driving the ball with power, his career won’t last long. He also struck out 20 times in only 70 at-bats, but this can once again be chalked up to his lack of pitch recognition and the adjustment to higher levels of pitching.

The players in the Arizona Fall League are typically top prospects, who play in either Double or Triple-A. This level of competition is hard for players who have spent the last 12 years training, much less a guy who just came out of a 12-year layoff.

The Mets had 14 players leave the team in spring training to go represent their countries in the World Baseball Classic, opening up those spots for minor leaguers to show what they’ve got facing off against big league talent. Tebow was one of the minor leaguers who received a shot and made his spring training debut on March 8th.

Batting eighth as the designated hitter, the rookie struggled as he went 0-3. He struck out twice, grounded into a double play with the bases loaded, and was hit by a pitch. He faced the reigning American League Cy Young Award Winner, Rick Porcello, and struck out on four pitches. He grounded into a double play in his next at-bat, which scored a run.

Tebow also had an embarrassing blunder as he went to the wrong on-deck circle to warm up. He told the media after the game, “I thought you walk around because you’re a left-hander. I found out you don’t do that.”

The Mets have announced that he will start again on March 10th, and will be playing the outfield this time.

So far the Tim Tebow baseball experiment is going about as well as one might expect. Tebow has struggled against live pitching, but has shown signs of improvement. He worked with Washington Nationals second baseman Daniel Murphy in the offseason to work out the kinks in his swing and has shown that he is fully dedicated to making his dream a reality. Murphy confirmed to ESPN’s Marty Smith that Tebow’s baseball career isn’t a farce, or publicity stunt. He is following his heart and wants to do it.

I believe that if the Mets’ put him on a low-level minor league team and set a favorable environment for his development, Tebow has a chance to at least become a serviceable baseball player. Probably just at the minor league level, but possibly the Major Leagues.

Failure won’t be a surprise

If he fails, so what? Not many people expect him to make it anyway. It wouldn’t be too big of a surprise. Even if he just ends up spending a season or two in the minor leagues before fizzling out, he will generate some merchandise revenue for the Mets and will provide a great mentor and leader for the young kids playing in Single-A.

One of the complaints against Tebow is that he is taking the spot of a competent prospect. That isn’t true as teams have many roster-filler type players who will never make it to the Major Leagues. Only 10% of all minor league players actually make it to the majors. He isn’t taking anyone’s spot, especially at a low level like Single-A.

The media is going to continue to slander Tebow. It won’t stop anytime soon. He will continue to be called a circus, or a sideshow. He’ll just continue to power through it like he always has. Do I think he’ll ever make it to the Major Leagues? No, but I’m rooting for him and it’ll be entertaining to watch him try.