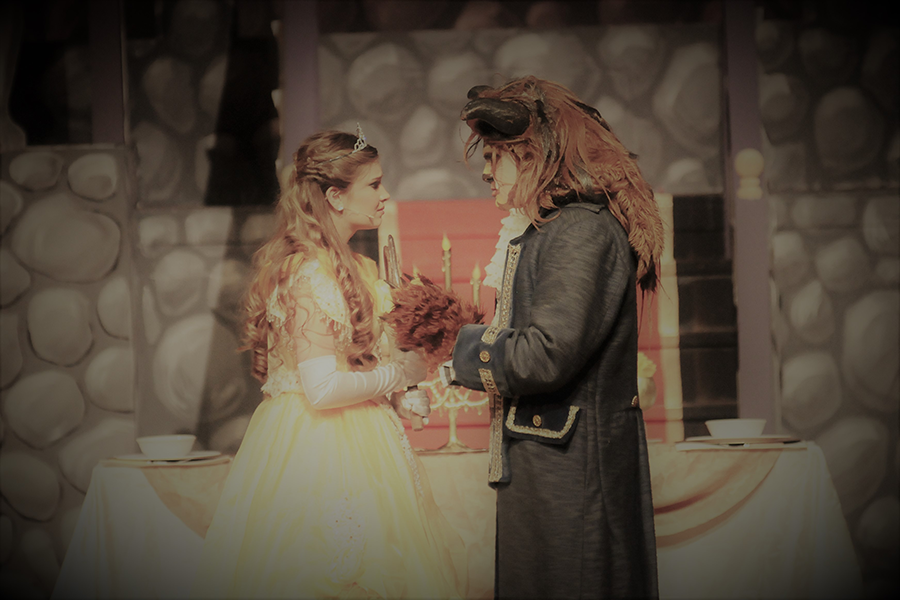 Seton-Elder’s Beauty and the Beast was majestic

The Seton-Elder Performing Arts Series put on its rendition of the classic Beauty and the Beast this Friday (sold out), Saturday (sold out) , and Sunday (sold out) with opening night being this past Wednesday.

As I watched, I paid particular attention to the props, costumes, makeup, music, choreography, and, of course, the characters.

Without further ado, here is an honest review of Elder-Seton’s Beauty and the Beast.

The makeup was done by quite a few people, but Mr. Gary Rogers and Elder Alum, professional makeup artist Andrew Maloney ’07, had a large part in it. Maloney did makeup on Lumière (Zach Martin), Monsieur ‘Arque (Noah Hornbeck)  and Rogers did makeup on the Beast (Andrew White).

The costumes all cost a pretty penny and were rented from TheaterWorld down in Florida. Consequently, the costumes looked tremendous which, along with good acting, really enhanced the verisimilitude of the musical.

Certain props such as the food, the torches and clubs used by the mob, and artwork around the fireplace in the castle were done by Donna Willmes Kohler ’85 and Jenny Stein ’83. Other props and scenery were done by Rogers; he designed the Beast’s (Andrew White) castle, the book shelf, Gaston’s (Paxton Kelley) throne, and he designed Maurice’s (Mitch Mohan) contraption that was seen towards the start of the play.

Overall the makeup, the costumes, and the props/scenery were grade A. With the amount of experience floating among the staff, they might as well be considered professionals, and their work speaks true to this assertion. 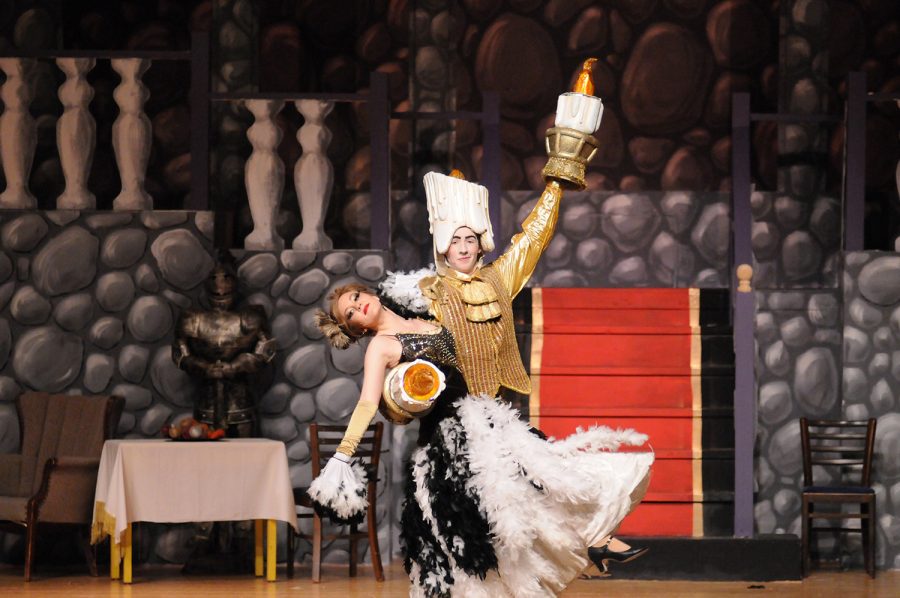 My personal favorite aspect of the play may have been the music. Mr. Dave Allen, Elder’s music director, brought the Cincinnati Metropolitan Orchestra (which he also conducts) to provide the soundtrack for the play. Like the staff, the music crew had decades of experience behind them; I mean they are part of an actual orchestra.

Music affects the mood of the audience, it sets the tone, and it provides emphasis at the most important points throughout the musical. So, with great music comes a great final product.

The end result is a musical that was not just visually but also harmoniously delightful.

My other favorite parts of the production were the dance numbers. There is something awingb about 50 people working in unison on the stage at once. Especially the scene at Gaston’s tavern, it was quite remarkable.

Head choreographer, Katie Farry Gaskamp, did a tremendous job, and the scenes she helped direct are worth the price of admission.

Ruff is one of the most theatrically talented individuals to have ever graced the stage for the Seton-Elder performing Arts Series.

She was the star of the show to say the least, and few, if any, can rival her voice at this stage in the game.

Her acting is nothing short of professional which helped make the musical as spectacular as it was.

White’s depiction of the Beast was stupendous.

My character was so deep, and the transformation was something special to perform.”

As soon as he walked down the stairs of his castle and said something in a brute tone, I could tell this was not the Andrew anymore.

He took on his role, made it his own, and really brought a sense of authenticity to the work.

As the main male character, White got his fair share of singing parts, and each one blew me away.

Whether it be chasing Belle, flexing his muscles, or making degrading jokes Gaston was a real piece of work, and Kelley made sure we were all annoyed from the get go.

Being that mean and funny character was great.”

Ultimately, Kelley’s Gaston was the most unlikable character in the whole play, so that means he did his job.

Not to under estimate the Paxton and his many talents, but I did not know he could sing until Wednesday night. Oh man, he could sure sing.

Kelley was swift, conceited, and proud in her portrayal of Gaston making him one of the biggest pieces of the puzzle that put together this awesome musical.

“
The upperclassman have made my experience great. I am going to miss them when they graduate.  ”

Martin, a sophomore, is one of two underclassmen to get a lead role in Beauty and the Beast.

Being as funny as he is while not in character, Lumière is the perfect role for Martin, and watching him hop, glide, and sing around the stage was quite the spectacle.

The degree of comfort he feels on stage at this point is surreal. Luckily for Martin, and the rest of us, he has two more years left at Elder, so I am sure the best has yet to come.

Cogsworth is Lumière’s partner in the crime throughout the musical, and the collaboration between Sunderhaus and Martin was comical and down right entertaining.

Although the two go together quite well, Cogsworth and Lumière are the foils of one another. With Cogworth being a little more serious and practical opposed to Lumière’s carelessness.

Sunderhaus was great as he brought a degree of seriousness to the table while still presenting a relatively foolish persona for comedic relief.

Wearing a bulky clock costume may not always be the easiest while running around stage, but Sunderhaus made it work.

It’s been really fun being able to develop in my character over the last couple of months.”

Mohan plays an oddball character who is constantly harassed throughout the work: getting attacked by wolves, imprisoned, and accused of insanity.

As cruel as it may seem, watching Mitch get beat down is quote enjoyable when it is all in good fun.

His acting was spot on as always, and he showed off his voice in the duet between him and Ruff which was glorious.

I did not realize Reiring was behind the character of Lefou until intermission – in a good way. The makeup crew, along with Reiring’s acting and signing, really transformed his character into the the goofy and comical role that makes this musical fun to watch. Reiring deserves resounding applause for his part as LeFou.

Many aspects of the musical impressed me, but Davis’s french accent for Babette was remarkable and nostalgic for all those who grew up watching the cartoon version of Beauty and the Beast in which all of the “inanimate” objects have distinct accents.

Davis was one of the senior leaders of the musical, and her talents really brought the production together.

Meyer was the other underclassman to seize a lead role, and she looked just as cool, clam, and collected as anyone else.

Her voice was tremendous. Like Martin, Meyer could definitely see herself getting the top role in one of the next two annual musicals.

Jacobs may have had the best costume of the night while wearing wardrobe as she rolled around the stage.

Her acting was superb, and she can hit a vibrato unlike anyone else. I am glad she got a solo during one of the song and dance numbers.

Darnell stole the hearts of fans with his role as Chip the Tea Cup. As a first grader in a large scale production such as this, Darnell was unfazed under the big lights. His humorous lines, delivered quite eloquently,  always hit home with the crowd. Above all else, Darnell is talented, and I cannot wait to see where his theatrical career goes from here.

The musical was electric, the crowd got involved, and it was above and beyond my expectations.

As I watched, I began to notice that hours upon hours must have went into each scene, each prop, and each character. Between the students and the faculty, Seton and Elder are ripe with talent and, most importantly, people who genuinely care.

The musical as a whole gets five out of five stars from me.

Unsurprisingly, all of the shows have been sold out, but if you are lucky enough to stumble across an extra ticket take advantage.